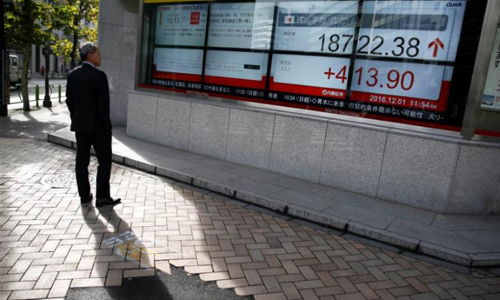 NEW YORK - Key stock indexes around the world were little changed on Friday, as were the U.S. dollar and U.S. Treasury yields, in low volume trading ahead of the Christmas holiday weekend.
The U.S. dollar slipped against a basket of major currencies .DXY, lingering about half a percent below a 14-year peak set earlier this week. The dollar index has gained 5.0 percent since Donald Trump's U.S. presidential victory on Nov. 8, but was little changed for the week. U.S. Treasury prices were slightly firmer as investors made minimal moves in a holiday-shortened session. Bonds showed little reaction to data showing that new U.S. single-family home sales rose 5.2 percent on an annual basis in November to the second highest pace since 2007, while consumer sentiment hovered near a 13-year high this month. "No one wants to take additional risk between now and the end of the year. They don't want to jeopardise those gains," said Stan Shipley, strategist at Evercore ISI in New York. Trading volumes have been muted this week, which is also the last full week of trading this year. U.S. markets will be shut on Monday for the holiday-in-lieu of Christmas Day which falls on a Sunday this year. U.S. equity indexes were mixed and remained near their Thursday closing levels, with the three major indexes on track to post weekly gains. The Dow Jones Industrial Average, which came close to the 20,000 mark earlier this week, looked set to record its seventh straight weekly gain. "It's going to get tough to get over that 20,000 mark. We can do it, but it's going to take a catalyst to move investors," said Jeff Kravetz, a Phoenix-based regional investment director of the Private Client Reserve at U.S. Bank. The Dow Jones Industrial Average .DJI rose 14.8 points, or 0.07 percent, to 19,933.68, the S&P 500 .SPX gained 2.74 points, or 0.121187 percent, to 2,263.7 and the Nasdaq Composite .IXIC added 15.27 points, or 0.28 percent, to 5,462.69. European stocks were mixed, with banks edging higher after both Deutche Bank (DBKGn.DE) and Credit Suisse (CSGN.S) settled investigations into U.S. mortgage securities sales. A bailout for Italy's oldest bank, Monte dei Paschi, was also approved as Italy's government looked to end a protracted banking crisis that has gummed up the economy. European shares closed little changed with an index of Italian lenders .FTIT8300 up 0.64 percent. While Monte dei Paschi shares were suspended from trading, Italian government bond yields rose, with 10-year yields moving to 1.83 percent IT10YT=TWEB. MSCI's broadest index of Asia-Pacific shares outside Japan.MIAPJ0000PUS, which touched a five-month low on Thursday,fell 0.46 percent, to post a weekly drop of 1.7 percent in a second consecutive week of declines. Japan's Nikkei .N225, closed for a holiday on Friday, wasup 0.1 percent for the week. The index has posted seven straightweeks of gains, its longest winning streak since early 2013,boosted by the yen's weakness in the face of a surging dollar. Gold edged higher as the U.S. dollar retreated from its 14-year highs, tempting some buyers to take advantage of a near 10-month low in prices after six straight weeks of decline. Crude oil futures were little moved but U.S. oil prices closed at a 17-month high just over $53 a barrel. -Reuters