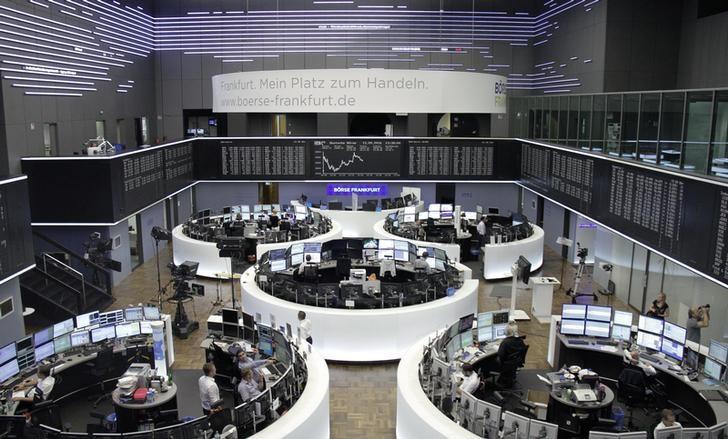 LONDON – World stocks steadied at two-month lows on Thursday though bond markets stayed firmly in the red, as eight years on from the collapse of Lehman Brothers two of Europe's top central banks prepared to keep their interest rates pointing down.
Europe's main stock markets in London .FTSE, Frankfurt .GDAXI and Paris .FCHI dipped in and out of positive territory as the region struggled to pull out of a five-day losing streak. Primarily it has been caused by nagging concerns that having resorted to previously unthinkable measures like negative interest rates and mass money printing, top central banks are now running out of options to get economies going. Euro zone bond yields crept up again in early deals as the real power driver, the 10-year U.S. Treasury yield US10YT=RR climbed back past 1.71 percent which lifted the dollar .DXY against the yen JPY=, euro EUR= and pound GBP=. "We are 150 percent focused on the fixed-income selloff," said State Street's head of global macro strategy Michael Metcalfe. "The market concern is that the central bank support is going to be different going forward," he said, adding that tandem falls in equity and bond markets pointed to "a big unwind of risk". That theme of central bank policy effectiveness was live. The Switzerland's central bank kept its key interest rates in deep negative territory in Zurich and repeated its view that the Swiss franc was "significantly overvalued" and that it was willing to intervene in the FX markets. The franc CHF=EURCHF= barely budged. The Bank of England was also meeting, with it widely expected to stand pat after cutting rates and ramping up its stimulus program last month in a bid to limit any Brexit damage to the UK economy. Economists and traders will be watching carefully though to see whether it reconfirms that it plans to cut rates again toward the end of the year. "The BoE is important in a broader sense for the market," said State Street's Metcalfe. "That would send the message that at least one of the major central bank is still being as easy as can be." GOLD SHINES A soggy Asian session had seen the Nikkei in Tokyo N225 slide 1 percent following an uninspiring performance from Wall Street where the Dow .DJI lost 0.2 percent and the S&P 500 .SPX shed 0.1 percent. Both the U.S. Federal Reserve and the Bank of Japan hold policy meetings next Wednesday. The BOJ is in particularly focus with it due to comprehensively review its policies. Sources say board members could debate cutting the bank's rates further and changes to its already massive asset-buying program. Among commodities, Brent crude LCOc1 limped up 0.6 percent to $46.11 a barrel after dropping 2.6 percent on Wednesday when data showing large weekly builds in U.S. petroleum products offset a surprise draw in crude stockpiles. Metals markets were drifting for the most part with China's exchanges now closed for the rest of the week for a public holiday, while gold, which investors often see as a safe-haven asset, edged higher amid the cautious market mood. Emerging markets continued to be buffeted by that caution meanwhile, with key currencies falling against the dollar and MSCI's closely followed 27-country EM index down for a fifth day. There was good news for Ukraine though as IMF agreed after a delay of almost a year to hand over the latest instalment of its $17.5 billion four-year bailout. –Reuters