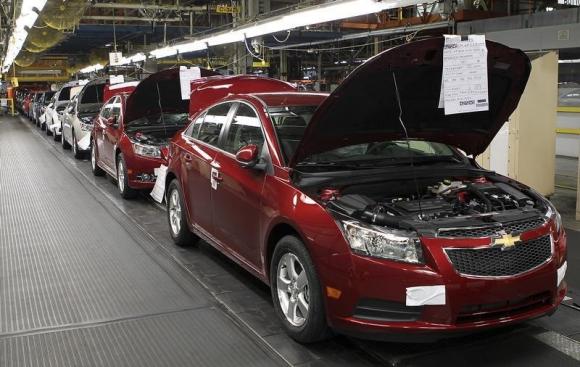 MEXICO CITY - General Motors Co (GM.N) will build its next-generation Chevrolet Cruze small car in Mexico, the company said on Monday. GM will invest $350 million to produce the Cruze at its plant in Coahuila, as part of the $5 billion investment in Mexican plants announced last year. It is the first time the Cruze will be made in Mexico, according to a GM spokeswoman in Mexico, and production will be mainly for the domestic market. The Cruze is currently imported to Mexico from GM's plant in South Korea, she said. A GM spokesman in the United States said the company's assembly plant in Gunsan, South Korea, will continue to build Cruze cars to meet demand in domestic and export markets. He declined to say whether added Cruze production in Mexico meant that the Coahuila plant's capacity would expand or was simply shifting among models it builds. Eleven plants globally make the Cruze but some, including a plant in Australia where GM is shutting down assembly operations, will not build the next generation model, he said. The company said it will continue manufacturing the model at its factory in Lordstown, Ohio. GM has so far only identified three plants globally that will make the next-generation Cruze, including a plant in China. GM's plant in Coahuila currently makes the Chevrolet Sonic, Chevrolet Captiva Sport SUV, and the Cadillac SRX, according to the spokeswoman in Mexico. The Cruze announcement comes at a time when automakers are looking to expand in Mexico to take advantage of its low labor costs and free trade agreements. Toyota Motor Corp (7203.T) is set to approve a new plant in Mexico within weeks, according to people familiar with the matter. Volkswagen AG (VOWG_p.DE) recently announced a $1 billion investment in its plant in Puebla to build the new Tiguan compact crossover SUV. - REUTERS