Goffin stuns Federer to set up London final against Dimitrov 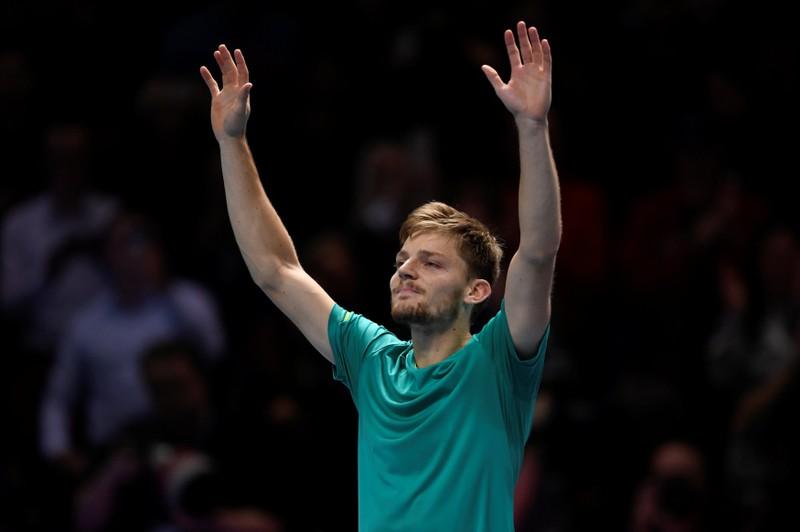 Goffin stuns Federer to set up London final against Dimitrov

LONDON (Reuters) - As if clocking up a first victory over Rafael Nadal was not enough, David Goffin continued breaking new ground by stunning Roger Federer at the ATP Finals on Saturday to claim the biggest win of his career and reach the final.

Few gave the willowy world number eight a prayer against the Swiss maestro who had glided through his three round-robin matches unbeaten for the 10th time.

Yet Goffin, beaten in all six prior meetings with Federer, turned the tables to win 2-6 6-3 6-4 and become only the sixth player to beat Nadal and Federer in the same tournament.

Dimitrov, who will end the year at three in the rankings, will start as hot favourite having thrashed Goffin 6-0 6-2 in group play this week.

Goffin, the first Belgian to qualify for the season climax, could scarcely believe his victory over Federer.

“Both are really special. It was the first time against Rafa. Then the semi-final, to beat Roger for the first time here in such a big event, big tournament, it was the perfect moment,” Goffin, who beat a hobbling Nadal on Monday, said.

“It is the greatest win of my career, for sure.”

Goffin missed Wimbledon after injuring his ankle at the French Open but is enjoying a dream end to 2017 with next week’s Davis Cup final in France still to come.

On Saturday, it appeared he would have an extra day to prepare for national duty as 36-year-old Federer feasted on the elegant Goffin’s medium-pace game to boss the opener.

But Goffin is made of sterner stuff.

The second game of the second set was to prove a turning point as Goffin, beaten 6-2 6-1 by Federer in Basel last month, broke the Swiss’s serve with a forehand winner and then consolidated his lead to take the match into a decider.

Growing in confidence, the 26-year-old broke Federer’s serve again at 1-1 in the third set as the Swiss, suddenly hesitant, struck a backhand out.

Nineteen-times major champion Federer squandered a break-back point in the next game when his attempted pass was met with a sharp volley by Goffin. Goffin stayed cool and his moment of truth arrived at 5-4. Consecutive aces gave him a 30-0 cushion before he put a nervy forehand in the net. Federer then went wide with a forehand to give Goffin two match points and a first serve proved too good.

It was only Federer’s fifth defeat of a superb year in which he roared back from an injury lay-off in 2016 to win the Australian Open and Wimbledon titles.

“It’s disappointing to finish on this note. But whatever happened today is less important than if I look at the entire season. With that season, I‘m extremely happy,” Federer said.

Dimitrov won his last two group matches for the loss of four games and continued in that vein against Sock, racing into a 4-0 lead. Sock began to offload on his seismic forehand though and roared back to snatch the opening set. Sock switched off in the second set but was back firing in a superb decider, wasting a break point chance in the first game. It was too close to call but two Sock double faults helped Dimitrov break for 5-3. The Bulgarian had lost his previous two clashes with Sock having held match points and three went begging in a nervy finale before he ended the contest.