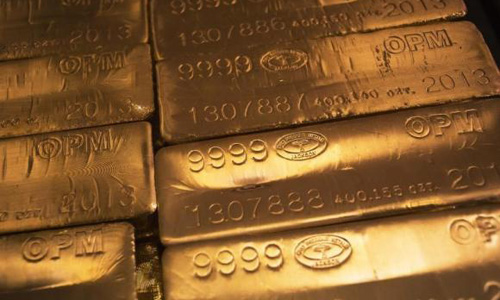 LONDON - Gold extended a recovery from recent lows on Monday as its resilience below $1,100 disappointed those expecting a deeper decline, but expectations that U.S. interest rates could rise as early as September kept up pressure on prices. The metal has fallen in the second half of this year on the prospect of rising rates, which would lift the opportunity cost of holding bullion while boosting the dollar. Gold has however found support after sliding to a 5-1/2 year low at $1,077 an ounce last month. Spot gold was up 0.3 percent at $1,095.41 an ounce at 1222 GMT, while U.S. gold futures for December delivery were up 40 cents an ounce at $1,094.50. "We are seeing a few disillusioned shorts scaling back," Saxo Bank's head of commodity research Ole Hansen said. "We have been rangebound since the collapse on July 20, with many recently established short positions not performing at these levels." The dollar rose 0.2 percent against a basket of currencies on Monday, climbing back towards near four-month highs in the wake of Friday's employment data and keeping some pressure on gold. U.S. nonfarm payrolls increased by 215,000 in July, less than the 223,000 rise that economists had expected, but still seen in line with a tightening labour market. Payrolls data for May and June was revised to show 14,000 more jobs created than previously reported. While the market is still awaiting further clues on the prospect of a near-term rate hike, gold is lacking an immediate driver, ABN Amro analyst Georgette Boele said. "Gold had a big move down at the end of July, and since then it has just stayed below $1,100," she said. "Gold prices just need a new acceleration point. We still expect the interest rates in the U.S., and the dollar, to (provide that)." Gold fell for a seventh week in a row last week, its longest such retreat since 1999, having struggled to pull away from a 5-1/2-year trough of $1,077 reached in July. Holdings of the world's largest gold-backed exchange-traded fund, SPDR Gold Shares, slipped to their lowest since September 2008 at 21.47 million ounces on Friday. Spot platinum was up 0.9 percent at $968.50 an ounce and palladium was down 0.1 percent at $597.50, both still close to last week's multi-year lows. Silver was up 0.2 percent at $14.87 an ounce. - Reuters