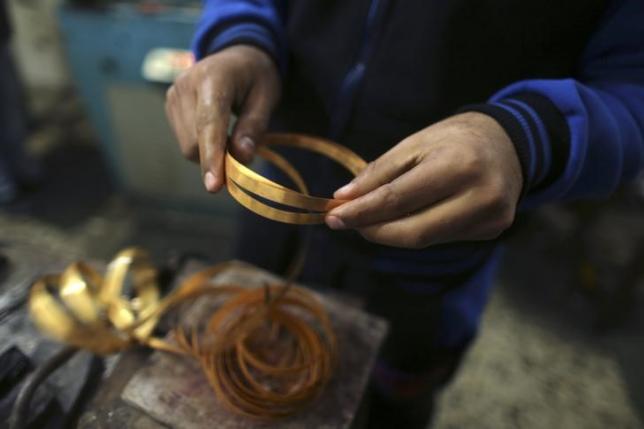 SINGAPORE – (Reuters) - Gold gained for a second straight session to trade near a three-week high on Monday after US jobs rose at the slowest pace in more than a year, fuelling expectations the Federal Reserve could postpone an anticipated rate increase. US nonfarm payrolls increased 126,000 in March, less than half February's pace and the smallest gain since December 2013, the Labor Department said on Friday. That ended 12 straight months of job gains above 200,000 - the longest streak since 1994. That could prod the US central bank to delay a rate increase that analysts had expected to come in June or September amid signals from the Fed it was ready to tighten monetary policy in view of a strengthening labour market. "I think people are feeling comfortable being long gold after the payrolls data," said Yuichi Ikemizu, branch manager at Standard Bank in Tokyo. Spot gold was up 0.4 percent at $1,215.50 an ounce by 0215 GMT. Bullion hit a session high of $1,218.45, close to a three-week peak of $1,219.40 reached on March 26. US gold for June delivery climbed 1.3 percent to $1,215.90 an ounce. A delay in the first US rate increase since 2006 would burnish gold's draw as a safe-haven asset. The greenback could take a hit as investors push back rate hike bets, making dollar-denominated gold cheaper for holders of other currencies. Whether gold makes a renewed push for $1,300 - a level it last touched in October - would depend on the dollar's movement, said Ikemizu. The Fed may postpone its rate hike after Friday's employment report, said Mizuho Bank. "What's more, it implies that the pace of tightening may be more gradual," the bank said in a note. Other precious metals rose. Spot palladium jumped 2 percent to $755.50 an ounce and platinum gained 1.3 percent to $1,169.70 an ounce after hitting a one-month high of $1,177.50 earlier. –Reuters