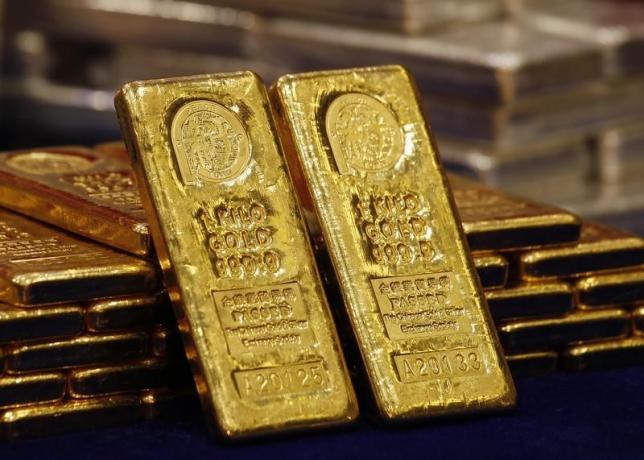 MANILA -  Gold gained for a fifth session in a row on Wednesday to trade near a three-week high, benefiting from weaker equities after China's devaluation of the yuan stoked fears of a currency war. China's surprise 2 percent devaluation of the yuan on Tuesday, seen as a move to bolster a flagging economy, was condemned by U.S. lawmakers as a grab for an unfair export advantage. The move hit global equities, prompting some investors to seek safe-haven assets such as gold which has now recovered around 3 percent from a 5-1/2-year low of $1,077 during a late July rout. Asian stocks and emerging currencies tumbled on Wednesday after Beijing allowed the yuan to fall sharply for a second day. Spot gold was up 0.2 percent at $1,110.80 an ounce by 0231 GMT, after peaking at $1,119 on Tuesday, its highest since July 20. "The only reason gold may benefit will be purely from a safe-haven perspective," said OCBC Bank analyst Barnabas Gan. If China's action indeed spurs a currency war, every currency would depreciate and dollar strength continue, said Gan, which would eventually weaken gold. Gan also said the weaker yuan would make it more expensive for China, the world's top consumer, to import gold, potentially extending weak Chinese demand that has been the case since 2014. U.S. gold for December delivery gained 0.2 percent to $1,109.50 an ounce. China's currency devaluation is unlikely to distract the U.S. Federal Reserve from a domestic economy that appears increasingly ready for higher interest rates, according to economists and Fed watchers. That could limit gold's upside potential. A looming hike in U.S. interest rates had weighed on non-interest yielding bullion. "We are still looking for a rate hike this year despite all that's happened," said Gan. Spot silver dropped 0.3 percent to $15.23 an ounce after hitting a one-month high on Tuesday. Platinum slipped 0.2 percent to $982.20 an ounce, having touched a three-week top overnight and palladium eased 0.3 percent to $599.90. - Reuters