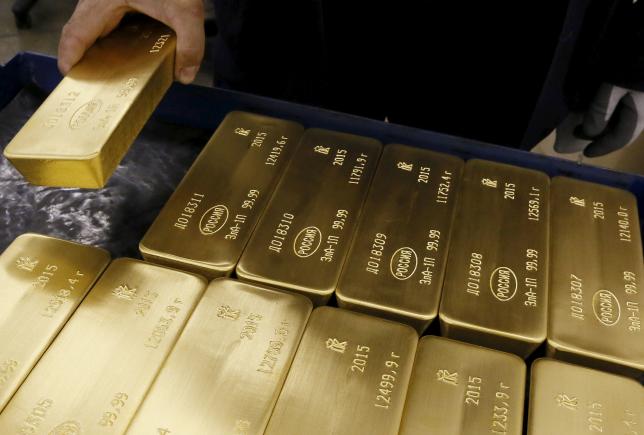 MANILA - Gold steadied not far above a 5-1/2-year low on Monday, with a firm dollar after solid U.S. job gains in July suggesting the Federal Reserve could raise interest rates as early as next month. U.S. nonfarm payrolls increased 215,000 in July, less than the 223,000 rise that economists had expected, although still seen in line with a tightening labour market. Payrolls data for May and June was revised to show 14,000 more jobs created than previously reported. Spot gold was unchanged at $1,092.86 an ounce by 0220 GMT, recovering from an early low of $1,089.40. Gold managed to eke out marginal gains on Friday after the jobs data was released, with the smaller-than-forecast number spurring some hopes that the Fed could hike rates later than September. "While a delay in rate hike expectations may ease some of the near-term pressure on gold, it does not mean prices would rally from current levels given expectations that the Fed will eventually hike rates," said HSBC analyst James Steel. A looming U.S. rate rise, the first since 2006, had weighed on non-interest yielding gold, pulling more funds to the dollar. The greenback stayed close to its highest level since April against a basket of currencies. The metal fell for a seventh week in a row last week, its longest such retreat since 1999, having struggled to pull away from a 5-1/2-year trough of $1,077 reached during a late rout in July. U.S. gold for December delivery eased 0.2 percent to $1,092.20 an ounce. Holdings of SPDR Gold Trust, the world's largest gold-backed exchange-traded fund, slipped further, hitting 21.47 million ounces on Friday, the lowest since September 2008. Top gold consumer China is under growing pressure to further stimulate its economy after disappointing data over the weekend showed another heavy fall in factory-gate prices and a surprise slump in exports. China's foreign exchange reserves, the world's largest, fell by $42.5 billion in July to $3.65 trillion, the sharpest monthly drop since March amid signs of capital outflows. The value of China's gold reserves dropped to $59.24 billion from $62.4 billion. Spot palladium and platinum were slightly lower, staying close to last week's multi-year lows. Silver was off 0.2 percent. - Reuters