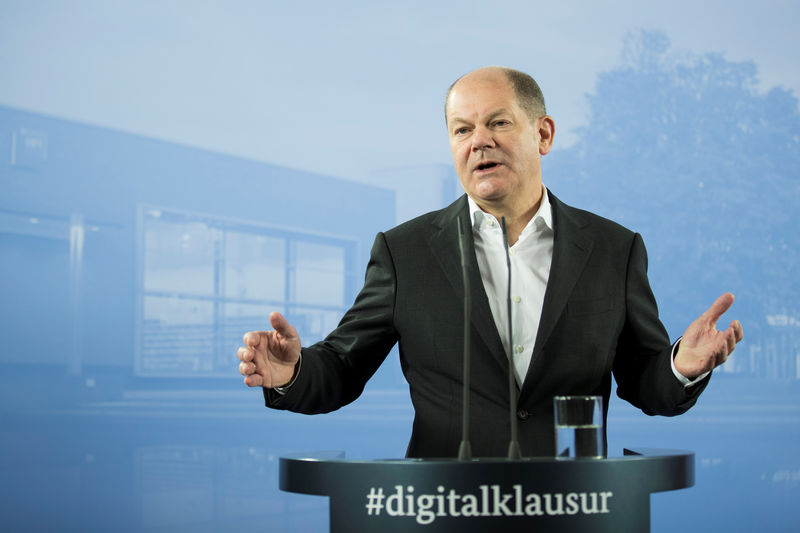 BERLIN (Reuters) - The golden years of German tax revenues regularly exceeding expectations are ending, Finance Minister Olaf Scholz told newspaper Bild am Sonntag. Germany has enjoyed a surplus since 2014 as the European Union’s largest economy has grown for nine years in a row, but growth is expected to weaken in 2019 as headwinds from trade frictions hamper exports. “The good times in which the state always took more tax than expected is ending,” Scholz said. “For 2018, we will again show a tax surplus. But the golden years are over. From now on, I don’t expect any more unforeseen additional revenue, certainly not on such a scale,” he added. He said the government would not be able to abolish the so-called solidarity tax - or ‘Soli’ - for all taxpayers, including the top 10 percent of earners, as Chancellor Angela Merkel’s Christian Democrats (CDU) want. “In the coalition negotiations, we agreed for good reasons that citizens with a very high income should continue to pay the Soli,” said Scholz, a member of the Social Democrats (SPD), junior partners in Merkel’s ruling coalition. “I expect our coalition partners to stick to the agreement.” At the same time, Scholz wants to increase the taxation of major international corporations such as Amazon.com , Facebook or Starbucks  - and is counting on the support of US President Donald Trump. “We have to stop this shift in profits to countries with little or no taxes, so I want to enforce minimum corporate taxation at the international level,” he said. “We are raising the subject with France and Japan at G7 and G20. And we have probably the US government as an alliance partner on our side,” he added.