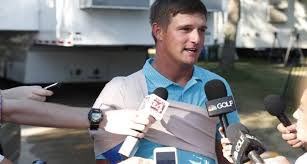 (Reuters) - American golfer Bryson DeChambeau has apologised after being rebuked for his behaviour at the end of European Open in Germany on Sunday. DeChambeau threw away any chance of victory with an error-strewn meltdown as he played the final four holes in five over par, including a triple bogey at the last on the Green Eagle course in Hamburg. He exchanged only the briefest of handshakes with the winner, journeyman Richard McEvoy, before striding rapidly off the green to sign his card. The display drew the attention of many on social media, including DeChambeau’s peer, Englishman Eddie Pepperell. “Has to be said, as far as classless handshakes go, that was a good’n!,” tweeted Pepperell, who last week threatened to steal an unlikely victory at the British Open, where he finished three strokes off the pace. Golf Channel analysts also commented on DeChambeau’s actions, noting the contrast with the way Greg Norman and Phil Mickelson have always handled major championship losses. It did not take long for DeChambeau to realise it had not been his finest moment. “I apologise to Richard McEvoy and the fans for my brevity on 18,” world number 23 wrote on Instagram. “He is a class act, worthy champion and I enjoyed playing with him the past two days.” DeChambeau finished equal 13th after closing with a six-over-par 78.