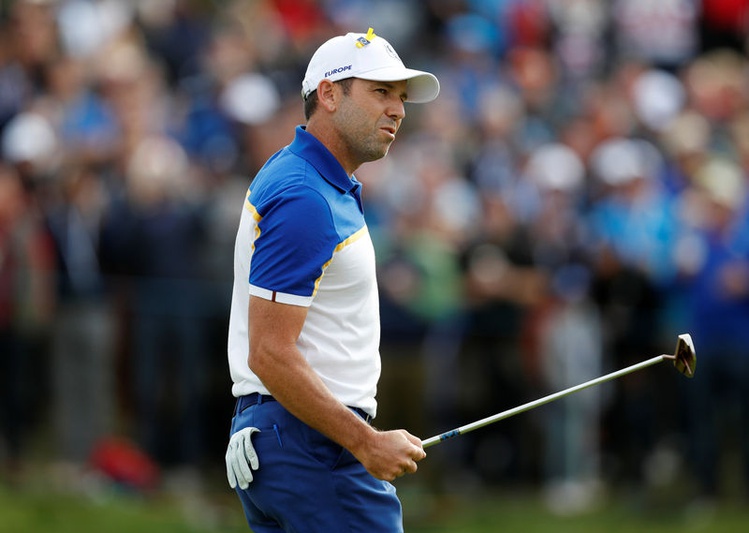 SUN CITY (Reuters) - Sergio Garcia birdied three of the last four holes on his way to a faultless opening round of 64 and a four-shot lead in the European Tour’s Nedbank Golf Challenge in Sun City on Thursday. Garcia, fresh from victory at the Andalucia Valderrama Masters last month, carded eight birdies as he seeks a third title at Sun City after wins in 2001 and 2003. It was the Spaniard’s lowest opening round score of the season by two shots and matched the biggest first-round lead on the tour in 2018. “It felt great. I rolled the ball nicely, I made some good putts here and there. It was one of those rounds where things happened nicely to me,” Garcia told reporters. “I played pretty smart, even though I probably wasn’t swinging unbelievably. I kept it under control and guessed some of the winds right, which is always difficult here.” The course at the tournament dubbed “Africa’s Major” is narrower than many on the circuit. “It’s important to keep the ball in play as much as possible here and it’s a precision type of golf course,” Garcia said. He leads from South Africa’s Charl Schwartzel, Frenchman Mike Lorenzo-Vera and Mikko Korhonen from Finland, who all carded four-under-par rounds of 68. A group of eight players are at three under-par, including defending champion Branden Grace and 2010 British Open winner Louis Oosthuizen. World number six Rory McIlroy could only manage a level-par 72 after a double-bogey at the par-four 17th following a wayward drive. McIlroy has yet to win on the European Tour this season but is still in contention for the Race to Dubai and to be crowned Europe’s top golfer for 2018. He would have to win in Sun City and next week in the United Arab Emirates to stand a chance of achieving that.