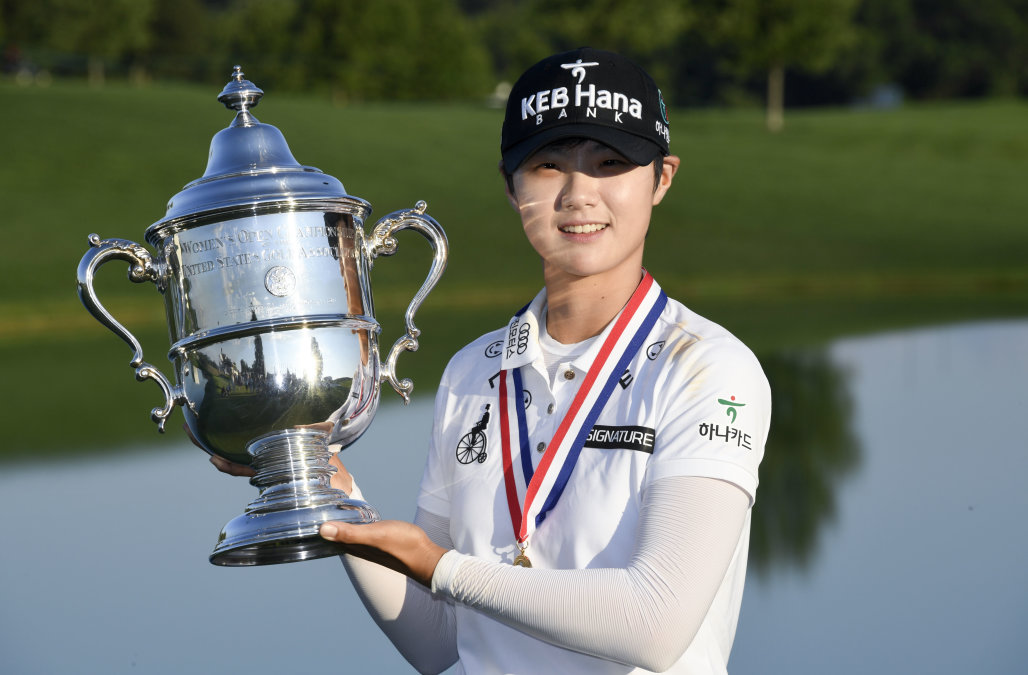 The 23-year-old Park, runaway favourite to win LPGA Rookie of the Year honours, birdied the par-five 15th to forge ahead and, after co-leader amateur Choi Hye-jin double-bogeyed the 16th, added a six-foot birdie at the 17th for some cushion.

Park, who won seven times on the Korean LPGA Tour in 2016, saved par at the par-five 18th with a superb chip from a tight lie behind the green to post a five-under-par 67.

As the poker-faced Park made her way from the 18th green to the scoring tent, she paused to wave and bow towards U.S. President Donald Trump, who looked down from his bullet-proof, glass-enclosed private box.

"To be honest I still cannot believe this is actually happening. It's almost like I'm floating on a cloud in the sky," Park said through an interpreter after signing for 11-under 277.

The precocious, 17-year-old Choi found water off the tee at the par-three 16th to scuttle her chance for an historic win, but birdied the last to complete a 71 for sole second at nine-under.

Choi was beaming with pride with a runner-up medal hanging around her neck.

"This tournament for me, even if I could just come and play, that alone would be an honour, but on top of that ... I get the runner-up and it is unbelievably joyous thing for me," said Choi through an interpreter.

The Korean dominance of women’s golf, providing seven of the last 10 U.S. Women's Open winners, was evident with the nation providing eight of the top 10 finishers, including the two new faces at the top who could further extend that domination.

Shanshan Feng of China, a seven-time LPGA Tour winner who had led since the opening round, hung in with a chance, needing to hole out from the fairway with her third shot for an eagle at the 18th to tie Park.

But after her shot bounded beyond the green, the 27-year-old Feng duffed her first chip and went on to card a triple-bogey for 75, finishing equal fifth at six-under.

For Park, it was a sweet bounce-back from last year's U.S. Women's Open at CordeValle in California.

Park, the 36-hole leader, finished 74-74 there, losing a chance at the title when she hit into a water hazard on the 72nd hole and ended up third, two shots out of a playoff.

She timed her run better this time, carding 73 and 70 in the first two rounds and began the final day three strokes back before posting her second successive 67.

Choi narrowly missed becoming the second amateur in 72 years of the event to win and first since 22-year-old Catherine Lacoste of France hoisted the trophy 50 years ago at The Homestead in Hot Springs, Virginia.