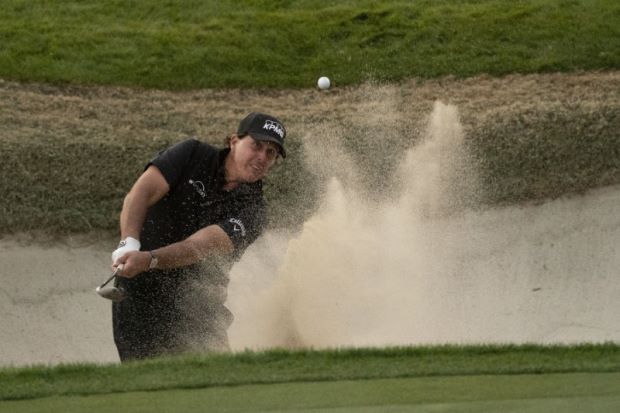 LAS VEGAS (Reuters) - Phil Mickelson has played in Tiger Woods’ shadow for much of his career but got some semblance of revenge by winning their $9 million (7.02 million pounds) matchplay exhibition under the floodlights in Las Vegas. With the match all square through regulation, Mickelson sealed the win at the fourth hole of a sudden-death playoff when he drained a four-foot birdie putt on a makeshift 93-yard hole after the duo had teed off from a practice green. Mickelson, whose tally of five major championships is well shy of the 14 held by Woods, savoured the win over a player he had a white-hot rivalry with more than a decade ago and whom he described as the best to ever play the game. “A day like today is not going to take anything away from his greatness. He’s the greatest of all time,” Mickelson said after “The Match” at Shadow Creek Golf Club. “But to be able to have just a little bit of smack talk for the coming years means a lot to me because I don’t really have much on him. He always drops the big picture and it’s the trump card.” Golf’s first venture into pay-per-view was hyped like a Las Vegas prizefight but proved more of a pillow fight with both golfers in jovial mood, playing for a purse that was put up by sponsors and will go to a charity of Mickelson’s choice. While the event lacked the tension provided by a Sunday back nine at the Masters, Woods set up a dramatic finish when his bump-and-run from beside the 17th green, with the match on the line, found the cup and brought the match to all square. “I just did not want the match to end on that hole,” said Woods, who grabbed his only lead at the day with a birdie at 12 but gave it right back at the 13th. Woods’ shot at 17 pumped some much-needed life into the match as the players headed to the 18th where Mickelson had a 32-foot putt for the win but failed to convert. Nothing was settled when the players returned to the 18th tee for the first extra hole and so they descended on the 93-yard hole where they had to wait as the grounds crew re-cut a hole on the 18th green. “To have a day like today, I just never thought we’d go to this extra hole,” said Mickelson. “My heart just can’t take much more of it.” After the two most popular golfers of their era hit their opening tee shots at Shadow Creek, they set off for what proved to be an underwhelming round in which both failed to deliver the highlight reel-type shots that have defined their careers. Instead, Mickelson and Woods shared stories, complimented each other, laughed like long-lost friends and made side bets for eye-popping sums. While the pay-per-view event was priced at $19.99, promoters decided to offer it free online at some point during play because of what they described as technical issues that impacted user access. It is not yet known if viewers who paid for the event would be credited. Woods and Mickelson, who are among the world’s highest-paid athletes, put up their own money for the side bets, including a whopping $1 million wager if either made eagle at the ninth hole. Neither golfer was able to cash in. Mickelson also earned $600,000 for winning three closest-to-the-pin side bets after losing $200,000 for failing to make a birdie at the opening hole. Money from side bets will also be donated to charity.