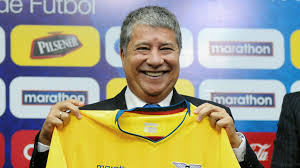 GUAYAQUIL, Ecuador (Reuters) - Ecuador’s football federation have named Hernan Dario Gomez, who led Panama to their first World Cup finals this summer, as the new coach of the national side. It will be the 62-year-old’s second spell in charge of Ecuador after leading them to their maiden World Cup in 2002. “I am very happy to be here in my home, a home that I never forgot and where I always thought I would return,” Gomez, who has also coached Guatemala and his native Colombia, said at his presentation in Guayaquil. “I had options in other South and Central American countries and from Europe but coming back to Ecuador was the dream for me.” His first task will be preparing the side for the 2019 Copa America in Brazil.