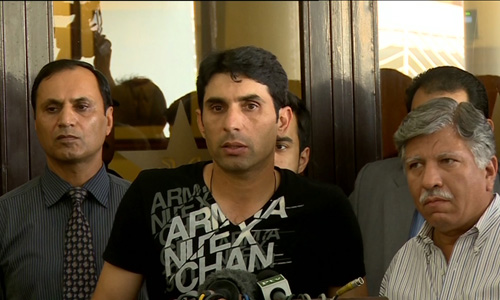 LAHORE (92 News) – Pakistan cricket team captain Misbahul Haq has said that the system should be improved instead of criticizing only one person Addressing a press conference at Gaddafi Stadium on Tuesday, he said that good people in the media supported him and the team. He asked journalists to keep in view moralities while appearing on TV. “No one except the game experts should be allowed to comment on the team.” “Shahid Afridi is a senior player and he was the only genuine all-rounder in the team,” he said, adding that Afridi was in form and they had no alternate to play another player at No 7 in his place. Misbah said that the team strived to come out of hard times. “We are not out of the World Cup after suffering a defeat at the hands of a common team,” he added. The Pakistan cricket team captain said that line-ups of Pakistan and other teams could not be compared. “I have no doubt over the struggle of any player and every player tried to perform the best.” To a question, he said that he has no right to differ with the selection committee and it is the policy matter. “Some good series, including India, are coming. But I have no plan to play the World Cup,” he said.