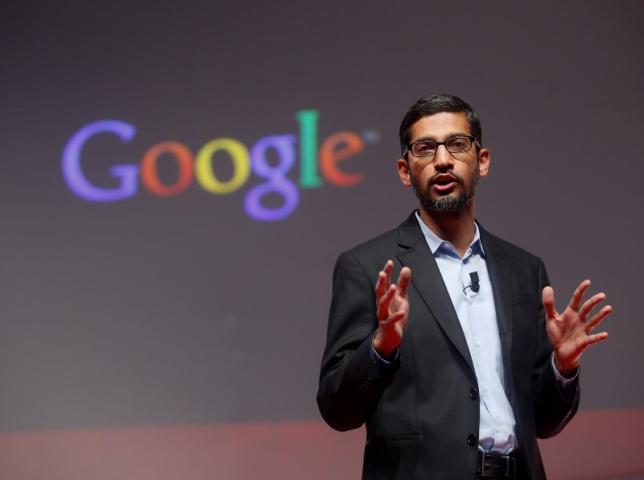 SAN FRANCISCO - Google Inc (GOOGL.O) announced a surprise overhaul of its operating structure on Monday, creating a holding company called Alphabet to pool its many subsidiaries and separate the core web advertising business from newer ventures like driverless cars. The move appeared to be an attempt by the search engine giant to focus on its more creative and ambitious projects, while investors cheered the potential for more financial disclosures of its disparate business segments. "It suggests that in all likelihood, Google is not going to slow the pace of their experimental processes like self-driving cars," said Michael Yoshikami, head of Destination Wealth Management, which has $1.5 billion under management. The surprise news sent shares of Google up as much as 7 percent to $708 in after hours trading. The new structure could also give Wall Street better insight into Google's investment in moonshot projects like Google X, a secretive lab that produced the unpopular Google Glass wearable device. "They are aware that they've got this hodgepodge of companies," said Roger Kay, an analyst at Endpoint Technologies Associates. "Maybe it's better to sort them out a bit and make it clearer which ones are bringing in the bacon and which ones are science projects and which ones are long-term bets." The Mountain View-based company co-founded by Larry Page and Sergey Brin in 1998 has grown from an Internet search engine to a far-reaching conglomerate that employs more than 40,000 people worldwide. Google's planned structure resembles the way companies like Berkshire Hathaway (BRKa.N) and General Electric (GE.N) are organized, with a central unit handling corporate-wide activities such as finance and relatively independent business units focused on specific areas. Under the new corporate structure, the Google unit will encompass the core search engine as well Google Maps and YouTube.

In addition to Google X, the company's new ventures such as Calico, which focuses on longevity, and connected home products maker Nest will be managed separately. Other units that are part of the new structure include Fiber, for its high-speed Internet efforts, venture capital arm Google Ventures, and Google Capital, which invests in larger tech companies. NEW STRUCTURE Alphabet Inc will replace Google as the publicly traded entity and all shares of Google will automatically convert into the same number of shares of Alphabet, with all the same rights. "This new structure will allow us to keep tremendous focus on the extraordinary opportunities we have inside of Google," Page, the current CEO of Google, said in a blogpost. (googleblog.blogspot.in/) Page will become CEO of Alphabet Analysts said the new structure could herald a new era of fiscal discipline and transparency in some of Google's more experimental and opaque business units. In a filing with the Securities and Exchange Commission, Google said the new arrangement will take effect later this year and that it will likely result in two reportable, financial segments. "For example, if a unit is doing well or badly they can dial it up or down, they can form partnerships or different companies," said Kay of Endpoint Technologies. Some other analysts were cautious, saying the new holding company would need to provide more details on cash flow of the experimental business segments. - Reuters