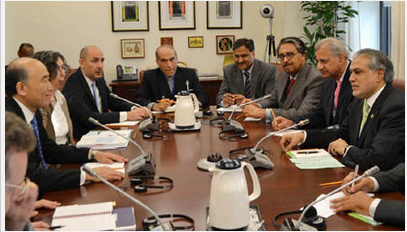 WASHINGTON (92 News) – Federal Minister for Finance Ishaq Dar has reiterated the government's commitment to continue reform agenda to put economy on a sound footing. Talking to International Monitory Fund (IMF) Deputy Managing Director Mitsuhiro Furusawa in Washington on Sunday, the minister said the sixth IMF review was completed without a waiver after Pakistan's fulfillment of the performance criteria. He expressed his satisfaction with the progress of the economy after the buildup of foreign exchange reserves, decline in inflation and discount rate and reduction of fiscal deficit. The IMF MD congratulated Finance Minister on successful 6th review of IMF programme. “I hope that Pakistan will continue its economic policies and reform agenda,” he said.