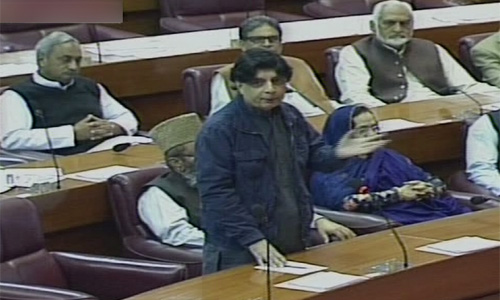 ISLAMABAD (92 News) – Federal Interior Minister Chaudhry Nisar Ali Khan has said that the government wants to take the killers of Imran Farooq to their logical conclusion. Speaking on the floor of the National Assembly on Thursday, he said that Saulat Mirza was not only involved in the murder of Shahid Hamid but also in the killings of several important personalities. “The execution has been postponed for 72 hours as he is not well enough to be hanged.” The minister said that it is duty of the government to pursue to the Imran Farooq murder case. “The cooperation will continue with Britain in the Imran Farooq murder case.” Chaudhry Nisar said that the government has discussed the Karachi affairs with British High Commissioner Filip Barton.