Graffiti, flags are only remains of Boko Haram in Nigerian town 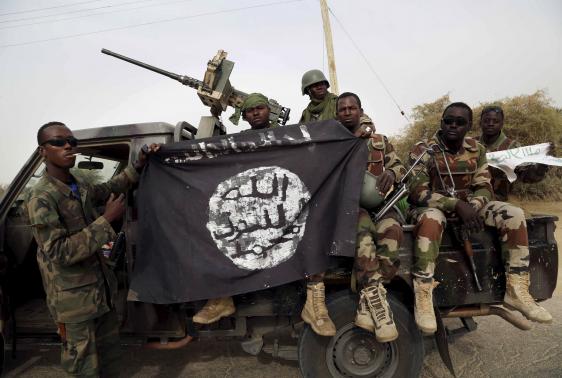 Graffiti, flags are only remains of Boko Haram in Nigerian town

DAMASAK, NIGERIA - Graffiti and Boko Haram's black and white flags were all that remained of the Islamists in Damasak after troops from Chad and Niger seized the town in northeastern Nigeria in the latest defeat for the militants. The town had been partially looted before it fell on Saturday but witnesses said there were few signs of fighting. Soldiers who patrolled the streets said morale was high after a string of military successes against the Islamist group. Chadian authorities took Reuters and other media to visit the town. Troops from the two countries entered Nigerian territory via Doutchi in Niger on Saturday and confronted Boko Haram. The militants fought back with landmines and gunfire, said Colonel Toumba Mohamed, who leads Niger's forces in the effort. "The resistance was fierce. The enemy even had armored personnel carriers," he told Reuters, estimating they had killed 300 insurgents. "Our objective is the conquest of territory and the elimination of targets, so it's good to grind down the enemy in front of us," he said. Heavily armed soldiers, who patrolled Damasak's sandy streets in Toyota pick up trucks and armored vehicles, said they were inviting terrified inhabitants to return to the town now that the insurgents had fled. Abandoned vehicles and motorbikes lay by the side of the street, with shops and garages standing empty. Chadian soldiers displayed scores of weapons, many of them battered AK47 assault rifles, captured from the Islamists. Nigeria's army said on Tuesday it had repelled Boko Haram from all but three local government districts in the northeast, claiming victory against the Islamist insurgents less than two weeks before a presidential election in Africa's most populist country. At the start of this year, Boko Haram controlled around 20 local government areas, a territory the size of Belgium, in its bloody six-year-old campaign to carve out an Islamic state in religiously mixed Nigeria. Damasak fell to Boko Haram in late 2014 as one of a string of towns captured by the rebels in Borno state. Nigeria's President Goodluck Jonathan, who is running for re-election, had been criticized for not doing enough to tackle the insurgency. His challenger, Muhammadu Buhari, has been campaigning on his reputation for being tough on security matters when he was military ruler of Nigeria in the 1980s. - Reuters