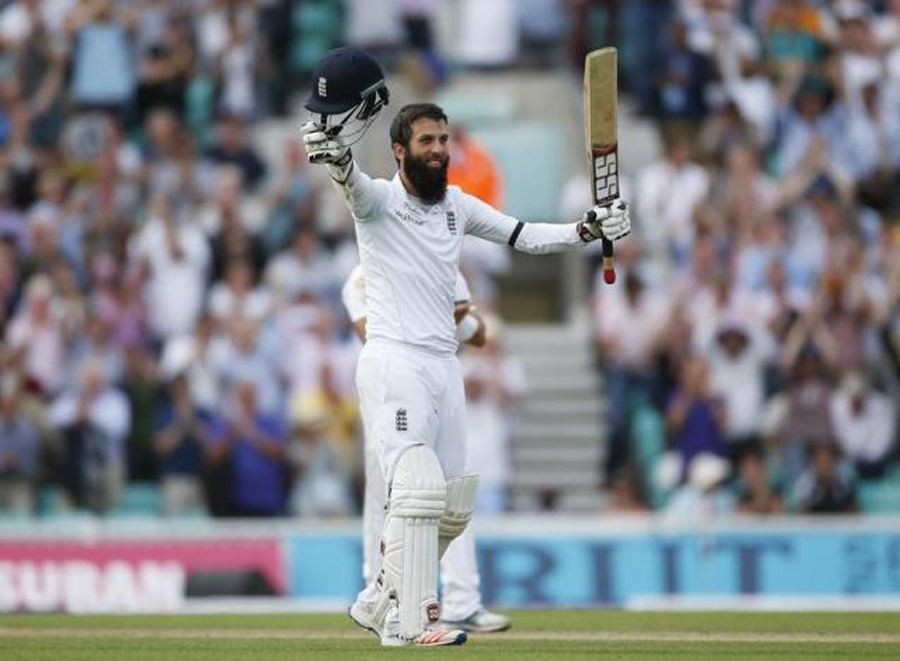 CHITTAGONG – Moeen Ali survived five reviews in his charmed innings as he and Jonny Bairstow helped England overcome their spin discomfort and post 258-7 in the first Test against Bangladesh on Thursday. Bangladesh off-spinner Mehedi Hasan (5-64) made a memorable Test debut, combining with Shakib Al Hasan (2-46) to torment the tourists who slumped to 106-5 after a top order collapse. Moeen featured in fifty-plus partnerships with Joe Root (40) and Bairstow (52) to rescue the tourists who were 21-3 after the first hour in the match. Chris Woakes was unbeaten on 36 at stumps with Adil Rashid (five) at the other end after an engrossing day of Test cricket. In the most extraordinary passage of play either side of the lunch break, Moeen was adjudged lbw to Shakib on three occasions, but every time the batsman got himself reinstated by successfully reviewing the decision. The day otherwise belonged to Mehedi, one of the three Bangladesh players who made their Test debut in the first of the two-Test series at Chittagong's Zahur Ahmed Chowdhury Stadium. The off-spinner, who turns 19 on Tuesday, was pressed early into service after home captain Mushfiqur Rahim decided to introduce spin in the second over. Mehedi, player of the tournament in the under-19 World Cup earlier this year, claimed his maiden Test wicket with a flighted delivery that disturbed fellow Test debutant Ben Duckett's (14) stumps. Encouraged by the breakthrough, Mushfiqur opted for spin from both ends and the move paid immediate dividend with Shakib dismissing Cook (four) with his second delivery. Cook, who became the most-capped England Test cricketer in his 134th appearance, went for a sweep only to drag the ball onto his stumps. Gary Ballance (one) was trapped leg-before by Mehedi after Mushfiqur used a review to successfully overturn the original not out decision. Only Root looked comfortable against the spinners, hitting five crisp boundaries in his fluent knock before Mehedi dismissed him to end his 62-run stand with Moeen. Shakib dismissed Ben Stokes for 18 with a dipping delivery that turned sharply to breach the batsman's defence and hit the top of the off-stump. Mehedi finally ended Moeen's vigil when he induced an edge which Mushfiqur collected behind the stumps. Moeen's battling 68 included eight boundaries and a six and he raised 88 runs with Bairstow who became Mehedi's fifth victim. SCOREBOARD