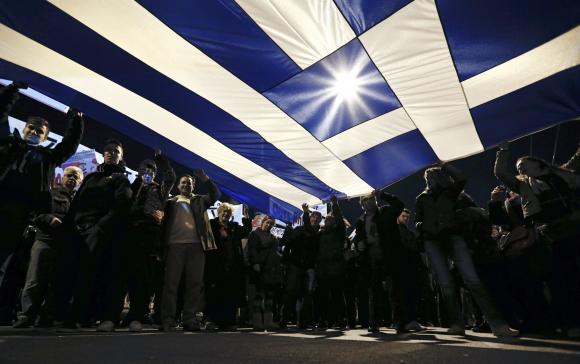 ATHENS (Reuters) - Greece said on Sunday it was confident of reaching agreement in negotiations with its euro zone partners but reiterated it would not accept harsh austerity strings in any debt pact. A day before a euro zone finance ministers' meeting in Brussels to shore up Greece's dwindling finances and help keep it in the euro zone, Prime Minister Alexis Tsipras told Germany's Stern magazine that Athens needed time to implement its reforms and shake off the mismanagement of the past. "I expect difficult negotiations; nevertheless I am full of confidence," he said. "I promise you: Greece will then, in six months' time, be a completely different country." The Eurogroup of finance ministers meets in Brussels on Monday to try to find common ground with Tsipras' new government, elected on a pledge to scrap the austerity strictures of Greece's international bailouts, on issues such as debt management, financing, privatization and labor reform. European Commission President Jean-Claude Juncker held a phone conversation on Sunday with Tsipras at the Greek prime minister's request, an EU official said, speaking on condition of anonymity and providing no details. "President Juncker is making a last effort in an extremely difficult situation," the official said, playing down hopes for an agreement at Monday's meeting. If the meeting produces no results, there is a concern that Greece will be headed for a credit crunch that would force it out of the euro zone. Progress, however, could mean further negotiations, perhaps later in the week. "The irresistible force will be meeting the immovable object," Vasileios Gkionakis, head of global FX strategy at UniCredit, wrote in a note. European Central Bank President Mario Draghi refused to discuss the possibility of Greece leaving the euro zone if an agreement with European Union and International Monetary Fund lenders fell apart as a result of Greece's demands to alleviate its debt burden. He simply reiterated the euro zone's founding position that membership is "irreversible". In Germany, however, economist Hans-Werner Sinn, head of the influential Ifo economic research institute, told the mass-market newspaper Bild that leaving the euro zone "would be better for the Greek people", although he expected Greece to stay.