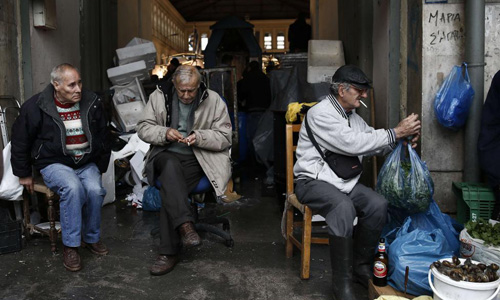 ATHENS (Reuters) - Greece will present its economic reform plans to the euro zone on Tuesday, a government official said, missing a Monday deadline for the list which is a condition for extending the country's financial lifeline. The official gave no reason for the delay but said euro zone finance ministers would consider Greece's plans, which include a crackdown on tax evasion and corruption, as scheduled on Tuesday afternoon. In Brussels a euro zone official said the "content of the letter will not be a surprise" to the euro zone and therefore the Tuesday submission was not a major issue. Greece has said it was working closely with its euro zone partners in drawing up the list. Germany, the biggest contributor to Greece's two bailouts totaling 240 billion euros, insisted earlier that any extra spending on Athens's list of reforms had to be offset by savings or higher taxes. The government of radical leftist Prime Minister Alexis Tsipras staged a climbdown on Friday to win the four-month extension of Greece's bailout, which had been due to expire on Feb. 28. Tsipras had promised to scrap the program when he won election last month. Earlier in the day, government spokesman Gabriel Sakellaridis had said the list of reforms would go to the Eurogroup by the end of Monday, meeting the deadline set under Friday's deal in Brussels. Athens has stressed the reforms would at least be decided by Greeks, in contrast to the austerity policies dictated by foreign creditors since they bailed out the country in 2010. The official later said: "The list of reforms will be sent to the finance ministers of the Eurogroup on Tuesday morning, while a teleconference will take place in the afternoon."   HUMANITARIAN CRISIS   The measures will include tackling what Tsipras calls Greece's "humanitarian crisis" - hardship created during years of economic depression - while dealing with tax arrears and bad loans, and ending the foreclosure of primary homes, the official said. They will also crack down on tax evasion, smuggling and corruption, restructure the public sector and cut red tape. The list will also include parts of the government's "Thessaloniki program" which in total envisages spending of 1.8 billion euros over a full year on relief measures such as free electricity and meals for the poor, while raising 3 billion from steps such as collecting tax arrears. Tsipras has declared victory in Friday's deal. But veteran leftist Manolis Glezos, a Syriza member of the European Parliament, accused him of failing to fulfill Syriza's campaign promises and said simply avoiding inflammatory wording would not soothe the public. The deal renamed the "troika" - despised inspectors from the European Commission, European Central Bank and International Monetary Fund who monitored Greek compliance with bailout commitments - as "the three institutions". "Renaming the troika as 'institutions', the bailout as an 'agreement' and creditors as 'partners' ... does not change the previous situation," Glezos wrote in a weekend blog. "I apologize to the Greek people because I took part in this illusion," he said. "Let's react before it is too late."   A PAUSE FOR BREATH   Athens negotiated in Brussels under intense pressure. A senior banker told Reuters that one billion euros flooded out of Greek bank accounts last Friday alone. JP Morgan estimated last week's outflow at 3 billion, taking the total so far this year to 25 billion, and meaning the banks were on track to run out of collateral for new ECB loans in eight weeks. Following a series of testy Eurogroup meetings, the international creditors will scrutinize the reforms to ensure they comply with another of Greece's concessions - that nothing it does during the four months will burden the state budget. "The ball is in the Greek government’s court," said German Foreign Minister Frank-Walter Steinmeier. "If Athens wants to see changes in individual points, then that is okay. But if these changes lead to further spending, then they need to save elsewhere or look to gather more revenue." Steinmeier noted the Eurogroup deal extended the bailout program only until the early summer. "Europe has a chance to pause for breath – that’s all – this is not a solution," he told Bild newspaper.   LITTLE GAINED   With Greece unable to fund itself commercially, the opposition, and fellow euro zone member Ireland, say Tsipras will have to negotiate a third bailout when the extension expires. The Brussels deal opens the possibility of lowering a target for the Greek primary budget surplus, which excludes debt repayments, freeing up some funds to help ease the effects of unemployment at 25 percent. But otherwise, Athens gained little. Tsipras now has to sell the Brussels deal and an eventual long-term agreement with the euro zone not only to voters but to Syriza's left wing and his junior coalition partner, the right-wing Independent Greeks There have been no signs of open dissent within Tsipras's party apart from the criticism from Glezos, who is not a party heavyweight but does command moral authority. As a young man under the World War Two occupation, he scaled the Acropolis under the noses of German guards to rip down a Nazi flag and hoist the Greek flag, making him a national hero. His decision to break ranks drew an abrupt response from the government. "Manolis Glezos is someone whom we will never cease to honor," said Sakellaridis. "But ... I believe that yesterday's statement in particular was misguided and wrong."