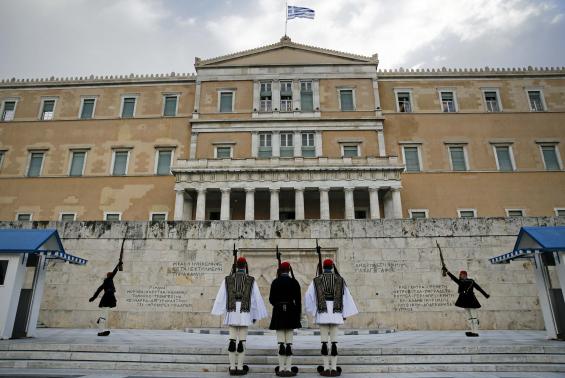 ATHENS/BRUSSELS (Reuters) - Greece is expected to ask on Thursday for an extension to its "loan agreement" with the euro zone as it faces running out of cash within weeks, but it must overcome resistance from skeptical partners led by Germany. With Greece's bailout program due to expire in little more than a week, the government of leftist Prime Minister Alexis Tsipras urgently needs to secure a financial lifeline to keep the country afloat beyond late next month. Financial markets rallied after Athens said on Wednesday it would submit a request to extend the loan agreement for up to six months, hoping this signaled a last minute compromise to avert a Greek bankruptcy and exit from the euro zone. EU paymaster Germany and fellow euro zone governments have insisted that no such deal is on the table and Athens must seek an extension to its full bailout, the very program that Tsipras promised to ditch when he was elected last month. German Finance Minister Wolfgang Schaeuble has poured scorn on suggestions that Athens could negotiate an extension of euro zone funding without making any promises to push on with budget cuts and economic reforms. But on Wednesday he indicated there may be some possibility of a compromise. "Our room for maneuver is limited," he said during a debate in Berlin, adding, "We must keep in mind that we have a huge responsibility to keep Europe stable." Greek Finance Minister Yanis Varoufakis expressed confidence on Wednesday that euro zone finance ministers would approve the Athens government proposal in a teleconference on Friday. "The application will be written in such a way so that it will satisfy both the Greek side and the president of the Eurogroup," he said.   FINANCES IN PERIL Greece's finances are in peril. It is burning through its cash reserves and could run out of money by the end of March without fresh funds, a person familiar with the figures said. The person said Athens had enough to repay a 1.5 billion euro installment to the International Monetary Fund next month but would struggle to pay public sector salaries and pensions in April. Likewise its banks are dependent on emergency funding controlled by the European Central Bank. The ECB agreed on Wednesday to raise a cap on funding available under the Emergency Liquidity Assistance scheme to 68.3 billion euros (US$78 billion), a person familiar with the ECB talks said. That was a rise of just 3.3 billion euros, below what Greece had requested. "The increase in the cap was a bit below what was requested, about 5 billion more, and expected," one senior banker said. "Assuming the present outflow trends persist, it is enough to carry us over for another week." This modest increase keeps Greece's banks, and thereby the government, on a tight leash and raises the pressure for a compromise at the Eurogroup. Whether finance ministers of the 19-nation currency bloc, who rejected such Greece's ideas at a meeting on Monday, accept its request as a basis to resume negotiations will depend on how it is formulated, an EU source said. The wording has to match EU legal texts to win approval in several euro zone parliaments. Tsipras said talks were at a crucial stage and his demands for an end to austerity were winning backing. "We have managed for the first time through contacts with foreign leaders to create a positive stance on our requests," he said at a meeting with President Karolos Papoulias. In a sign of concern in Washington at the financial risks to a strategically located NATO ally, U.S. Treasury Secretary Jack Lew telephoned Varoufakis to urge Greece to strike a deal with the euro zone and IMF, warning that failure would lead to immediate hardship. Lew said the United States would continue to prod all parties in the talks to make concrete progress, noting that uncertainty was "not good for Europe." The Athens government released documents on Wednesday indicating that it was taking a more flexible line to placate euro zone creditors than its anti-bailout rhetoric at home has suggested. They showed Varoufakis had offered to accept conditions on an extension to its loan agreements and even an inspection by the European Commission at a fraught meeting in Brussels on Monday. German Chancellor Angela Merkel signaled on Wednesday that Greece would have to give as well as take in negotiations. "If countries are in trouble, we show solidarity," she said in a speech to conservative supporters, naming Greece and other euro zone countries that had to take bailouts during the debt crisis. But she added, "Solidarity is not a one-way street. Solidarity and efforts by the countries themselves are two sides of the same coin. And this won’t change."