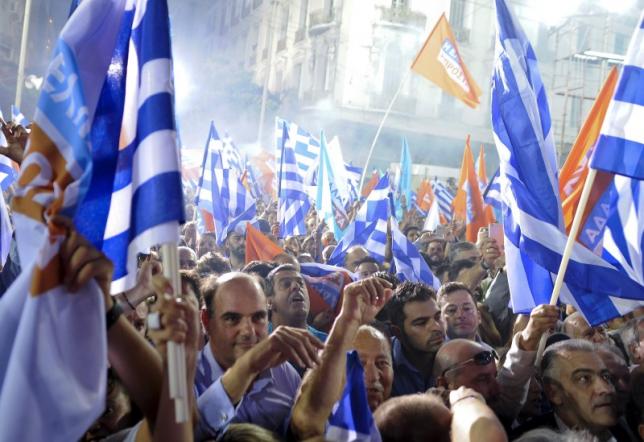 ATHENS - Greece's conservative New Democracy party has a lead of 1.4 percentage points over the leftist Syriza party ahead of a national election on Sunday, a Metrisi poll for the Eleftheros Typos newspaper showed on Friday. The poll showed New Democracy was set to get 28.5 percent of the vote on Sept. 20, while Syriza would get 27.1 percent. Most surveys over the last two weeks have put the two parties virtually neck and neck. The poll was conducted between Sept. 15 and 17, meaning it took account of voter reactions to Monday's televised debate between the parties' leaders - ex-prime minister Alexis Tsipras of Syriza and Vangelis Meimarakis of New Democracy. The Metrisi survey showed the far-right Golden Dawn party ranking third, with 5.6 percent, followed by the communist KKE party, with 5.4 percent, and the socialist PASOK party with 5.1 percent. It showed support for the Independent Greeks party, the junior partner in the previous coalition government, below the 3.0 percent threshold needed to enter parliament. Four opinion polls on Thursday underlined the tightness of Greece's election campaign, offering different outcomes but all pointing to no outright winner when ballots are cast. -Reuters