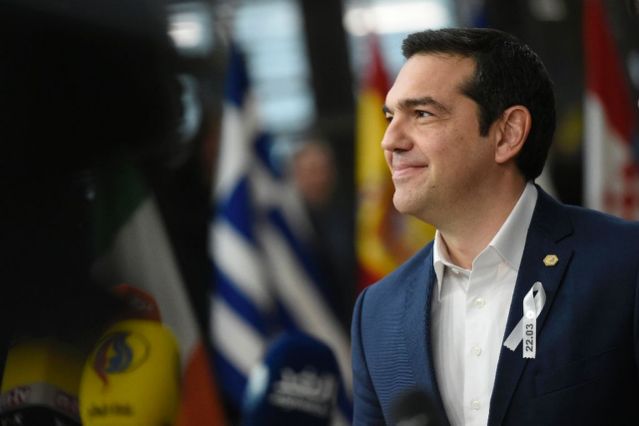 ATHENS (AFP) - On the side of a buzzing Athens highway, a group of middle-aged men huddle in the dark beside a tarpaulin-covered van, outside the offices of one of Greece's wealthiest families. Smoking cigarettes and drinking cheap wine, these TV veterans with a combined century of work experience are among the remnants of Mega Channel, once Greece's most influential station. Like hundreds of journalists, technicians and administrative staff hit by a new purge of Greece's long-suffering media sector, they have not been paid for more than a year. The latest jobs cull has come during a handover of power in three of the country's top media groups after a decision by under-pressure banks to pull the plug on a long history of bad loans. "We are unpaid by a business that is still operating -- and earning income that more than covers the payroll. And this makes us mad," says 56-year-old head cinematographer Grigoris Farmakas, who has worked at Mega for nearly three decades. The men are taking shifts to keep the protest going beneath the offices of Motor Oil, one of the country's two refineries, owned by the family of John Vardinoyannis, part owner of Mega. Corrupt triangle A parliamentary investigation in 2017 found that Greek media owe nearly 1.3 billion euros ($1.6 billion) to banks, part of a corrupt triangle of influence that had benefited politicians, media owners and bankers for decades. "While the going was good, media bosses, banks and politicians did whatever they wanted," says Yiannis Lambiris, a veteran journalist in prominent media group DOL, which also changed hands recently. "The banks took orders from all governments, regardless of party. The politicians essentially bankrolled the media. In return, the media would cover up bank missteps," he told AFP. A top DOL executive, Panagiotis Psycharis, in 2016 caused a stir when he told a parliamentary committee investigating bad loans that he secured a 15-million-euro loan with just his signature as collateral. "(A decade earlier), banks would give loans without collateral," another executive, Fotis Bobolas of the Pegasos group, told the same committee. The families of Vardinoyannis, Bobolas and Psycharis were all shareholders in Mega channel. The Bobolas family, which owns one of Greece's top construction firms, also controlled national newspaper Ethnos. But in 2010, the economic crisis hit Greece, and the banks nearly went bust. Then in 2015, the leftist government of Alexis Tsipras came to power, pledging to break the "economic oligarchs" and a "sinful triangle of banks, ruling parties and (media) interests". "The collusion of economic and political power is one of the gravest ills for the country and for democracy," Tsipras had said two years before coming to power. Banks tighten screws Within a year of the Tsipras government coming to power, and with increasing pressure from the European Central Bank to recoup loan losses, Greek lenders tightened the screws. Mega was the first to go under. The banks in early 2017 froze its accounts and called in the loans, after the shareholders failed to pump in new capital. The station also lacked the money to apply for a new TV licence issued by the government. Ex-staff kept the station alive with reruns of Mega comedies and soaps, some of the most acclaimed ever produced in Greece. But authorities will now decide in May whether to take the channel off-air. The DOL group was sold in May 2017 to shipowner Vangelis Marinakis, owner of Greek football champions Olympiakos Piraeus. Two months later, Ethnos and a number of sister publications were auctioned as well, to Greek-Russian businessman Ivan Savvidis, a former lawmaker for Vladimir Putin and owner of football club PAOK Thessaloniki. In the changeover, around 1,000 staff lost their jobs. Mostly over 50, these media specialists now rely on their parents' pensions, pawn valuables and fall back on odd jobs such as driving cabs and delivering food. "Many of us have mortgage payments and at risk of losing homes. We are selling valuables and property to make ends meet," says Farmakas. Data from Greece's leading journalist union Esiea show that more than 40 newspapers and two television stations have shut down since the start of the Greek economic crisis in 2010. Many of those working there, like former Ethnos writer Tatiana Oikonomidou, were never on the official payroll -- a common media practice -- and can therefore never claim severance pay or unemployment benefit. "My last payment was in October 2016. But I still need to pay 2,500 euros a year for social insurance, even without a job," Oikonomidou said. "I was recently offered a 12-hour week at a news blog for 100 euros a month," she laughs bitterly.