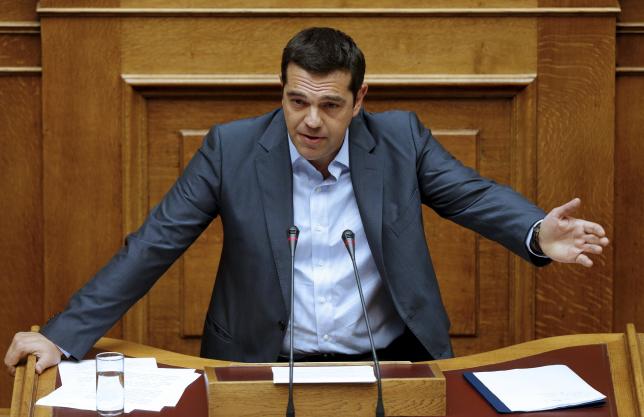 ATHENS - Greek Prime Minister Alexis Tsipras confronted a widening rebellion within his leftist Syriza party as parliament voted to approve the country's third financial rescue by foreign creditors in five years. The vote was held after daybreak on Friday after lawmakers bickered through the night over procedural matters. Euro zone finance ministers are expected to approve the vital aid for Athens later on Friday. Thanks to support from pro-euro opposition parties, the 85 billion euro ($95 billion) bailout programme easily passed with 222 votes in the 300-seat chamber. But 43 lawmakers - or nearly a third of deputies from Tsipras's Syriza party - voted against or abstained, well above the three dozen that defied him in a vote on reforms last month. Tsipras will call a confidence vote in parliament after Greece makes a debt payment to the ECB on Aug.20, a government official said. A senior lawmaker, Makis Voridis from the opposition New Democracy party immediately said his party would not vote in favour of the government, raising the odds that the government could be toppled. In an appeal to lawmakers before the vote, Tsipras defended the decision to accept a programme that comes at the price of tax hikes, spending cuts and economic reforms, saying it was a choice between "staying alive or suicide". "I do not regret my decision to compromise," Tsipras told lawmakers. "We are not exulting but we are also not mourning over this difficult agreement. I have my conscience clear that it is the best we could achieve under the current balance of power in Europe, under conditions of economic and financial asphyxiation imposed upon us." Parliamentary speaker Zoe Konstantopoulou, one of the Syriza hardliners, snubbed a request from Tsipras to speed up handling of the bailout bill. Instead, she raised a long series of procedural questions and objections which held up proceedings that were due to be wrapped up on Thursday. With the bill's passage, focus turns to a meeting of euro zone ministers in Brussels who now must approve the deal so aid can be disbursed before Athens must make a 3.2 billion euro debt payment to the European Central Bank on Aug. 20. Even before the vote revealed the depth of anger against the austerity measures, Syriza was edging towards a split. The leader of a far-left rebel faction, former energy minister Panagiotis Lafazanis, took a step toward breaking away from Syriza on Thursday by calling for a new anti-bailout movement. "The fight against the new bailout starts today, by mobilising people in every corner of the country," said a statement signed by Lafazanis and 11 other Syriza members and posted on the far-left faction's Iskra website. The statement called for founding a "united movement that will justify people's desire for democracy and social justice", although it did not explicitly call for a new party or a split from Syriza. The rebels insist the government should stand by the promises on which it was elected, to reverse the waves of spending cuts and tax rises which have had a devastating effect on an already weak economy over the past few years. -Reuters