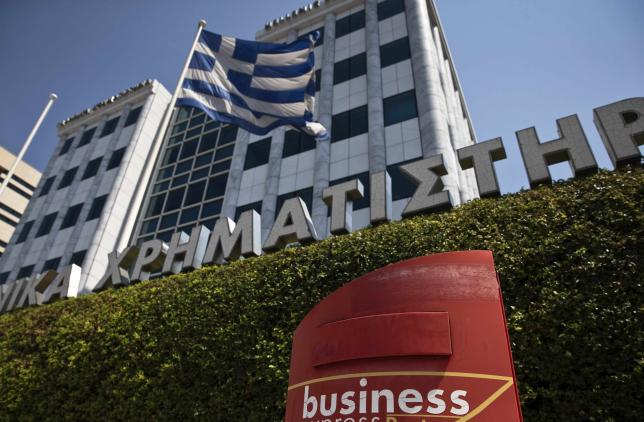 ATHENS - Greece will take another step away from full-on crisis mode on Monday by opening its stock market for the first time in five weeks, although immediate heavy losses are expected. Trading on the Athens bourse was suspended in late June as part of capital controls imposed to stem a debilitating outflow of euros that threatened to collapse Greece's banks and hurl the indebted country out of the euro zone. Since then, Athens has agreed a framework bailout plan with its European Union partners in exchange for stringent reforms and budget austerity. But implementation of the deal is some way off, keeping alive political and economic stability concerns. Market players in Greece and elsewhere are expecting stocks to fall sharply when the market opens at 0730 GMT. Ilya Feygin, managing director at WallachBeth Capital, estimated late last week that losses could be in the region of 19 to 22 percent. Takis Zamanis, chief trader at Beta Securities, agreed and went further, suggesting no single share would gain on the day. Part of this is based on what has happened to Greek assets traded in the United States. The "GREK" exchange traded fund (ETF) -- comprised of U.S. market listings of Greek companies -- fell around 20 percent in July. A similar loss was seen in U.S.-listed securities issued by National Bank of Greece. The Athens General Index has fluctuated sharply this year, which has seen left-wing Prime Minister Alexis Tsipras's newly elected Syriza government wrangle with European Union and International Monetary Fund lenders in bitter bailout talks. LIMITS Traders are expecting losses for a number of reasons that all weigh on the bourse. There is concern, for example, that negotiations on a new bailout will again become bogged down, leaving the government and banks perilously short of cash. A report on Sunday in Avgi newspaper, which is close to Syriza, said the government was seeking 24 billion euros ($26.37 billion) in a first tranche of bailout aid from international lenders in August. Of this, the newspaper said, 10 billion euros was earmarked for an initial recapitalisation of Greek banks, 7.16 billion euros to repay an emergency bridge loan and 3.2 billion euros to repay Greek bonds held by the European Central Bank and others. The European Commission, however, believes an agreement in August is unlikely and that a new bridge loan will be needed. This all puts Greek banking sector shares in the spotlight. Recapitalisation, both long- and short-term, waters down the value of existing shares. The banks are also not making profits this year and have lots of bad loans. With banking shares comprising 20 percent of the overall bourse, this does not bode well for Monday. Similarly, Greeks themselves will be severely restricted in what they can do. In order to limit the possibility of using shares as part of euro-flight, the government and ECB have said no extra money can be withdrawn by Greeks from deposit accounts to buy shares. Greece's dismal economic prospects may also weigh on the market. The European Commission says the Greek economy will contract 2 to 4 percent this year, a return to the recession that plagued the country for six years until 2014. - Reuters