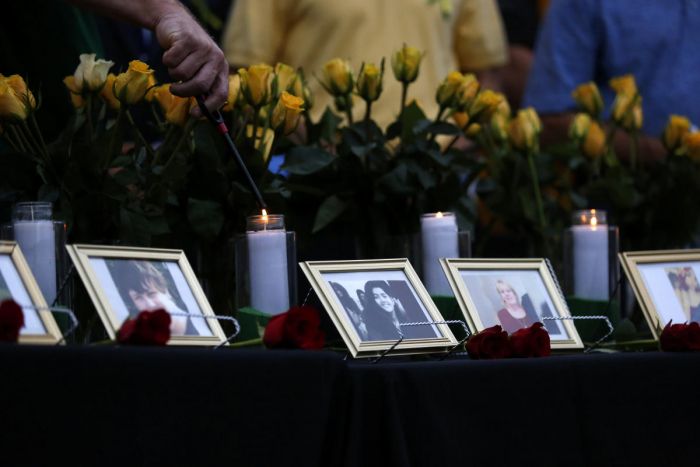 SANTA FE (Reuters) - The rituals and religious traditions may have been strikingly different, but a Methodist memorial service and Islamic funeral prayers held in two Houston suburbs  shared a profound anguish at the lives lost to high school gun violence in Santa Fe, Texas. Those attending both events expressed a sense of bewilderment that a place of education for young people had once again been transformed by the kind of carnage that has grown increasingly commonplace in the United States. The two services unfolded a day after authorities officially released the names of the eight students and two teachers slain on Friday at Santa Fe High School, marking the fourth deadliest shooting at a public school in modern US history. “What was supposed to be a safe place was not,” Rusty Norman, president of the Santa Fe Independent School District board of trustees, said as he addressed about 100 congregants at the Aldersgate United Methodist Church. Pam Stanich, whose son, Jared Black, 17, had attended a youth group at the church and was among those killed in the rampage, was embraced by many of the mourners as she arrived with other family members. Service dogs were present in the church’s adjacent fellowship hall, which has been used to house FBI agents and American Red Cross volunteers, to help console survivors and loved ones of the victims. A short time later at the Masjid Sabireen mosque, mourners crowded around the coffin of 17-year-old Sabika Sheikh, a Pakistani exchange student who died Friday’s massacre. They offered prayers and snapped pictures as her casket was carried outside following a service. The funeral prayers in Stafford, Texas, about 35 miles (56 km) east of Santa Fe, were attended by local politicians, including Houston Mayor Sylvester Turner, and drew a crowd of several hundred that spilled onto the surrounding grounds. A handful of men carried signs with slogans calling for improved background checks and higher age limits for gun purchases. One sign read simply: “Thou Shall Not Kill.” Among the throng was a group of about a half-dozen men who said they were streaming the event live via Facetime telephone video to members of the slain girl’s family watching from Karachi, Pakistan. Speaking to a Reuters correspondent on the Facetime call, a man who identified himself as Shabika’s father, Aziz Sheikh, said, “Everyone is very sad and praying for her.” He added that he wished to give “thanks to the Lord for all these communities from the bottom of my heart. It’s emotional to see all the people come out.” One of the men outside the mosque in Texas, Zaheer Khan, described himself as a close friend of the Sheikh family who remembered the girl as having aspirations to work in the field of women’s rights and education. Another 17-year-old student from the nearby city of Richmond, Anuza Shenwari, attended the prayer service with her mother to show their support for the victims’ families. “As a fellow high school student, it’s heartbreaking,” she said.