Guardiola boosted by timely return of Aguero and De Bruyne 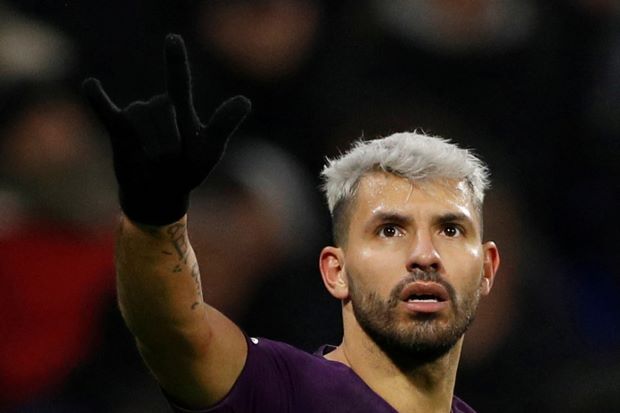 Guardiola boosted by timely return of Aguero and De Bruyne

LONDON (Reuters) - Manchester City’s influential duo Sergio Aguero and Kevin De Bruyne are in contention to face Everton at home in the Premier League on Saturday, as they look to rebound from their first domestic defeat of the season last weekend. City boss Pep Guardiola told a news conference that both players had come through training this week unscathed and might feature against a side City have not beaten at home in the last two seasons. “He (Aguero) did the last two training sessions. On Thursday, he trained with the team. He has no pain and we will decide,” Guardiola said. “With KDB (De Bruyne), it is the same case as Sergio – he has no pain but we will see.” Ahead of a packed festive schedule with six games in the space of 20 days, City’s squad may be stretched with David Silva, Danilo, Benjamin Mendy and Claudio Bravo all sidelined. Defender John Stones was forced off in City’s 2-1 win over Hoffenheim in the Champions League on Wednesday and his fitness will be assessed ahead of the weekend. Yet Guardiola said the mounting injury list would not force the club into the transfer market in January. “No, we are not going to sign anyone,” he said of his second-placed side, who sit one point behind unbeaten leaders Liverpool. They will reclaim top spot for at least 24 hours by securing a point against Everton, with Liverpool playing City’s rivals Manchester United on Sunday. Yet Guardiola was wary of the threat posed by seventh-place Everton, having drawn his last two home matches with the side now led by the attack-minded coach Marco Silva. “We make good games but we didn’t win, we dropped four points,” the Spaniard said. “Tomorrow is another game, the Everton team has changed completely with (Gylfi) Sigurdsson and Richarlison, (Lucas) Digne and Yerry Mina - it is a top side. “I’m really impressed with how they have done so far. It will be a tough, tough game...” Their task will be made easier should the club’s record goalscorer Aguero return to the line-up. The Argentine has been out since the beginning of the month with a muscle injury. In that time, City have scored seven goals in four matches in all competitions - a relatively modest tally for a side who notched a record 106 strikes in the league last season.