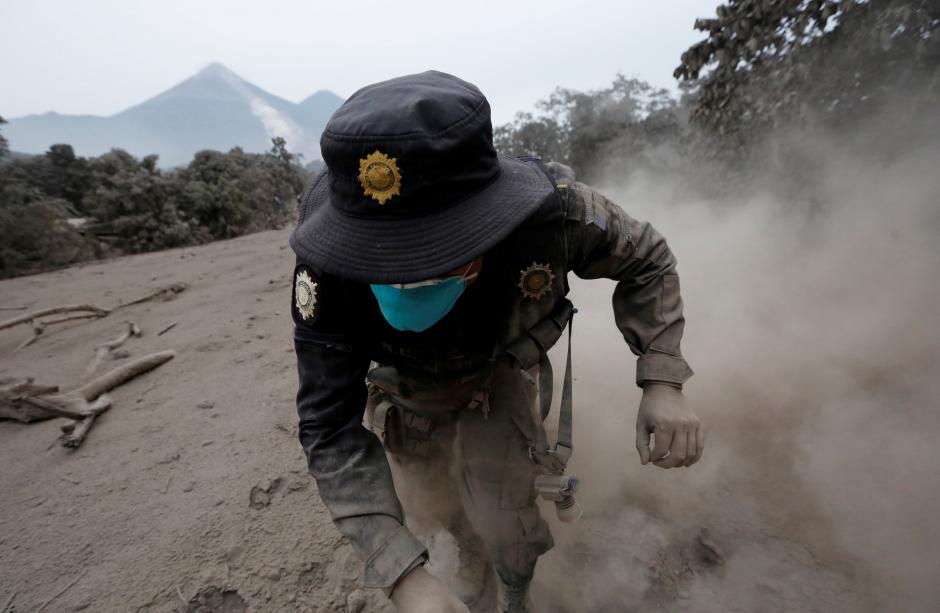 EL RODEO, GUATEMALA (Reuters) - The death toll from a volcanic eruption in Guatemala rose to 69 as family members desperately searched for the missing in makeshift morgues and on streets blanketed with ash. Guatemala’s national disaster agency, CONRED, increased the death toll as more bodies were pulled from the debris around the village of El Rodeo, which was hard hit by the eruption. Just a fraction of the victims have been identified so far. At a makeshift morgue in the city of Escuintla, about 30 km (18.6 miles) from the explosion, distraught family members came to search for their relatives among the dead. Francisco Quiche, a 46-year-old welder, gave a blood sample to try to identify his son’s body, though he already knew his son’s fate. After evacuating the town of El Rodeo with his family, he returned to search for his son and daughter-in-law. Peering through a hole in the wall of his son’s home, Quiche saw the boy’s body. He fears his daughter-in-law is dead as well. “We had time to leave, thank God, but I am very sorry for the loss of my son and my daughter in law,” he said through tears. “My son was just 22 years old, the same as my daughter-in-law, who was expecting a baby.” The eruption of Fuego - Spanish for “fire” - on Sunday was the biggest in more than four decades, forcing the closure of Guatemala’s main international airport and dumping ash on thousands of acres (hectares) of coffee farms on the volcano’s slopes. The volcano’s activity was lessening, and is expected to continue to diminish in the coming days, Eddy Sanchez, director of the seismological, volcanic and meteorological institute Insivumeh, told reporters. The task of retrieving bodies was hindered by another eruption and an apparent landslide on the southern slopes of Fuego triggered fresh evacuations. Later in the afternoon, heavy rains forced rescuers to abandon the search in El Rodeo until the next morning, a spokesman for CONRED said. Rains are expected to continue to complicate searches in the coming days, Sanchez said. Elsewhere, the process of mourning had begun. Local television footage showed residents of villages walking through the streets, caskets hoisted on their shoulders. Structures and trees at the base of the Fuego volcano were completely coated in brown and gray. Armed soldiers donning blue masks kept watch at a badly affected neighborhood that had been cordoned off, Reuters photos showed. The volcano continued expelling a dark cloud of gases and rocks. Fuego, one of several active volcanoes out of 34 in the Central American country, is near the colonial city of Antigua, a UNESCO world heritage site that has survived several volcanic eruptions. The latest activity is mostly on the far side of the volcano, facing the Pacific coast. The eruption on Sunday sent columns of ash and smoke 6.2 miles (10 km) into the sky, dusting several regions with ash. More than 3,200 people have been evacuated, CONRED said. CONRED shared a photo showing the flows of gas and mud sweeping down a mountainside and across a broad valley, engulfing a small village. “The landscape on the volcano is totally changed, everything is totally destroyed,” government volcanologist Gustavo Chigna said on local radio. The agency also launched an online registry of missing people. The eruption showered sand and ash on coffee plants across as much as 6,890 acres (2,788 hectares), including close to the volcano’s cone, causing an estimated loss of 0.91 percent of Guatemala’s coffee production, the country’s national coffee association said. In some areas, rain rinsed ash off the leaves, and the full extent of the damage was not yet clear, the association said.