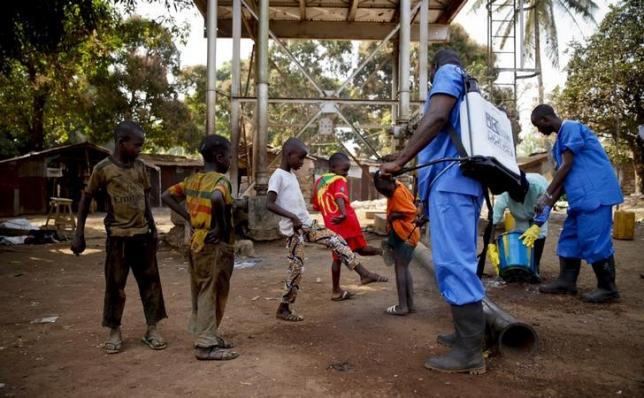 CONAKRY - Guinea's President Alpha Conde announced on Saturday new emergency measures enabling authorities to restrict movements in western Guinea where Ebola transmission continues a year after the epidemic was declared. More than 10,300 people have died from Ebola in West Africa and while cases are thought to have peaked, Guinea is struggling to stamp out the virus partly due to often violent resistance to officials working to end it. Following a dip in new cases in January, they have spiked again since early March in and around the capital, prompting officials to announce a new phase of the epidemic in Guinea.
"I declare in the districts of Forecariah, Coyah, Dubreka, Boffa and Kindia a reinforcement of emergency measures for a period of 45 days," Conde said on state television late on Saturday.
"Wherever the need may be, throughout this period, measures of restriction and confinement will be taken," he said in what would be a first for the country since the outbreak began. Food and medical supplies would be given to the affected communities, Conde added. He not specify where or when such restrictions would take effect. Neighboring Sierra Leone is currently implementing a nationwide lockdown as part of a drive to accelerate the end of the epidemic. Reuters reported last week that three doctors in a Conakry hospital had been infected with the virus because of a lack of infection control in a sign that the lapses that fueled the outbreak a year ago are dogging the final stages of the fight. Since then, a further six medical staff across three clinics in western Guinea have been infected, including two doctors, according to a report written by France's coordination team which provides technical assistance to Guinea on Ebola. "Indefensible instances of negligence are showing up at the heart of our health care system," Conde said. Centers where medical staff had caught the virus will be closed, he added. President Conde, who faces re-election in October, has set a target to get to zero Ebola cases by mid-April. The bauxite and iron ore-rich country is expected to take a $2 billion hit from Ebola and is trying to lure back investors, especially in the under-exploited resources sector. - Reuters