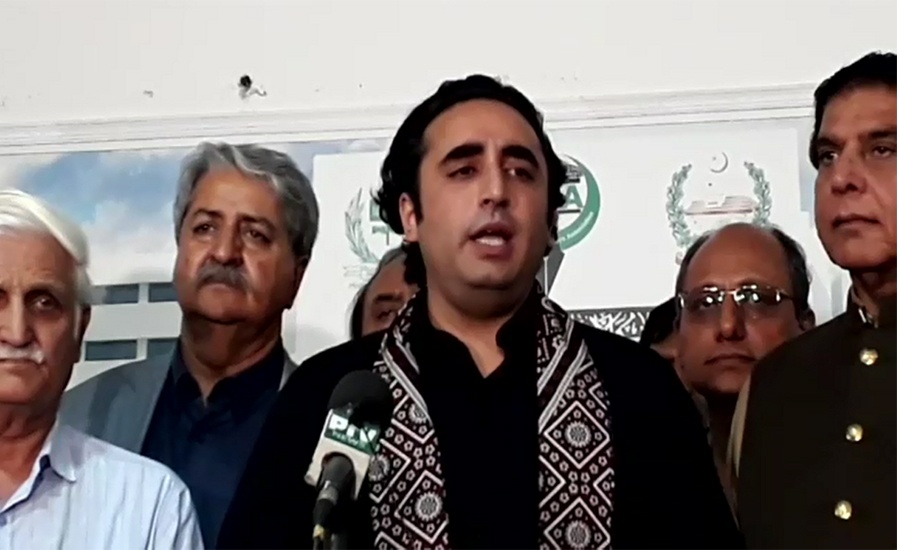 ISLAMABAD (92 News) – PPP chairman Bialwal Bhutto has condemned the revoking of the special status for Occupied Kashmir by the Indian government. Talking to the media outside Parliament on Monday, he said that the butcher of Gujarat was becoming the butcher of Kashmir. “A historic attack has been carried out on the Kashmiri people,” he said. Bilawal Bhutto said that now a single tweet would not work and the entire country will raise the voice from one platform for the Kashmiris. “Where are the people who did the politics in the name of Kashmir? Where is the prime minister of Pakistan?” he questioned. He said that each Pakistani is ready to fight for Kashmir. “The alliance of the opposition is vital for strengthening democracy,” he said. The PPP chairman said that Occupied Kashmir’s special status had been abolished in a democratic way. “The unity of the opposition is mandatory for strengthening democracy. My party has formed a committee to probe the Senate elections,” he said. He welcomed the government’s step to discuss the Kashmir dispute with the international community. “It is pity that the prime minister’s visit could not be proved more than photo sessions,” he added. Bilawal Bhutto said that the Pakistan government should raise the Kashmir issue at the international level.

On August 3, PPP chairman Bilawal Bhutto Zardari has said that the government should take Indian aggression seriously. He said that Pakistan will have to very cautious about the mediation of the third party on the Kashmir dispute. "In the past, Pakistan wasted the opportunity of exposing terrorism of India," he said. Addressing a press conference on Saturday, he said that Senate Chairman Sadiq Sanjrani should resign morally as a majority of senators are against him. "A fact-finding committee had been formed to probe the matter of 14 senators. The government has won by using undemocratic methods, but it has been exposed,” he said. The PPP chairman said that horse-trading would end if the opposition investigates the matter properly. “The economy is before all of us and people’s economic murder is going on in the country,” he maintained. He said that the people are losing confidence in the elections from the union council to the Senate. “Undemocratic forces and the government have suffered a defeat in the Senate election,” he added. Bilawal Bhutto said that the opposition knew they could lose the elections. “The world witnessed how the votes disappeared due to rigging in Senate.” He said that 21 senators had given him their resignations, but no resignation has been accepted so far. “Imran Khan had announced that secret balloting is horse-trading. Will he support the opposition if we introduce an amendment to the secret balloting?” he questioned. The PPP chairman said that 100 percent senators of his party were present in the meeting. “It is essential that opposition leaders should not blame each other. I had stated that the senators are being offered money. I am gathering the facts in this regard. I cannot expel anyone from the Pakistan People's Party mere on the basis of doubt,” he said. Bilawal said that he knew that which parties had voted for Sadiq Sanjrani first time. “Our opponents have been dreaming of an end to the Sindh government since 2007. I will return with a more majority within 90 days if they end my government in Sindh,” he claimed.