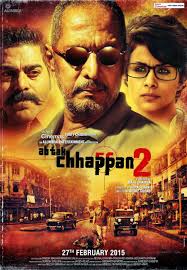 MUMBAI (Web Desk) - Gul Panag and Nana Patekar recently promoted the sequel of crime thriller 'Ab Tak Chhappan' in the showbiz capital. Speaking about the film, Panag said it's a great film and she is looking forward for a positive feedback from audience."This film captures the changing nature of crime. You can find many of the things that you read in newspapers and I hope you all will like the film, she added. While speaking about excessive film promotions, the 64-year-old actor said, "Actually in our times this kind of promotional strategies were not there and neither can I do them. This also I am doing because atleast people should know that this film is releasing on 27th February and after watching the film they can decide if it's good or bad." The film presented by Ram Gopal Varma is directed by Aejaz Gulab and written by Nilesh Girkar.