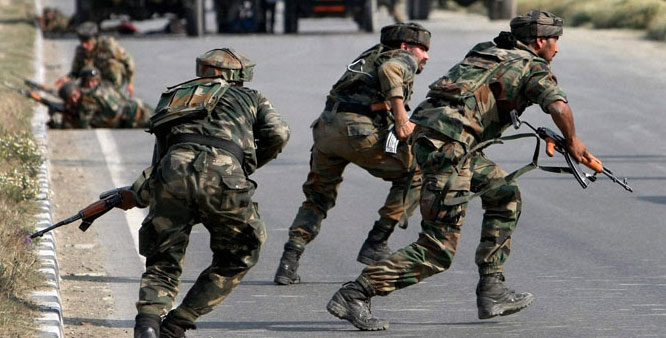 SRINAGAR – Two militants opened fire at an army camp in Indian Held Kashmir on Saturday in the second attack against security forces in two days, an army official said, adding to pressure on India's nationalist government after it swore to end such violence. Saturday's attack happened on the Pathankote-Jammu National Highway, around 20 km (12 miles) from the police station in Kathua district where six people, including two militants, were killed in a militant attack on Friday. Kathua district is about 15 km from the border with Pakistan. A gun battle was underway but there were no army or civilian casualties, said army spokesman Lieutenant Colonel Manish Mehta. Security agencies believe that the two militants are part of the same group that carried out the attack on Friday. "Terrorists opened fire from the road and our guard retaliated. We have cordoned the area and they are hiding in nearby bushes adjacent to the army camp," Mehta said. The national highway has been closed and state school examinations in the district have been called off. The previous big attack in Kashmir was in December, when militants struck at an army camp in Uri, also near the border with Pakistan but further up the Kashmir valley. "If (this) is indeed a terrorist strike, it marks a sharp departure from past attacks. Two attacks in two days in same area of Jammu very unusual," Former Jammu and Kashmir chief minister Omar Abdullah said in a Twitter post. –Reuters