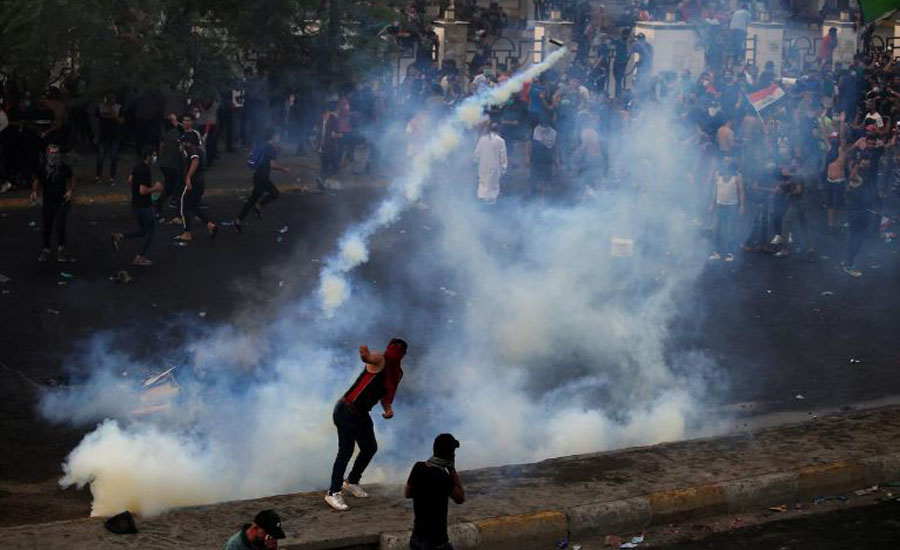 BAGHDAD (Reuters) - Gunfights between protesters and security forces broke out in the southern Iraqi city of Nassiriya on Wednesday, with elite counter-terrorism troops deploying after police “lost control” of the situation, police sources told Reuters. Two protesters had been killed in the city on Wednesday and one on Tuesday after police opened fire to disperse protests. Five people were killed overall and at least 132 wounded on Wednesday in renewed nationwide clashes between demonstrators and Iraqi security forces, the largest display of public anger against Prime Minister Adel Abdul Mahdi’s year-old government. Domestic instability coupled with regional tensions could prove to be the final nail in the coffin of Abdul Mahdi’s fragile coalition government, sworn in last year as a compromise between rival factions after an inconclusive election. The protests, which started on Tuesday over unemployment, corruption, and poor public services, have escalated, with many chanting for the “fall of the regime”, a slogan first popularised during the 2011 Arab Spring uprisings. To a question about the Sahiwal incident, the chief minister said that action was taken all officers and they are still in jail. About the Salahudddin case, he said that the judicial inquiry of the case is underway. Punjab IGP Arif Nawaz said that Sohail Shahzad is 27 and unmarried. “The accused is already a convict," he said. He said that the accused killed the children in June, August and September. “We are demanding a change, we want the downfall of the whole government,” said one protester in Baghdad who declined to identify himself for fear of reprisal. Five people were killed or died from their wounds on Wednesday, taking the toll to at least seven as at least two people were killed and 200 wounded on Tuesday. An Interior Ministry spokesman said one child was killed on Wednesday when a protester threw a bottle filled with gasoline at a vehicle carrying civilian passengers in Baghdad. Another was killed in the southern city of Emara and one protester died of wounds sustained on Tuesday. Police and the army opened fire and launched tear gas canisters to disperse hundreds of protesters all over Baghdad. Protesters blocked the main highway connecting the capital to Iraq’s northern provinces. Protests erupted all over southern Iraq - heartland of the Shi’ite Muslim majority who after years of voting along sectarian lines are turning on their political leaders for failing to deliver jobs and basic services. In Kut, protesters tried to break into the municipality building. Hundreds were out on the streets of Hilla and Diwaniya while dozens gathered in the Shi’ite holy city of Najaf. Thousands gathered in the oil-rich city of Basra but the protests were peaceful. There were peaceful protests in Samawa. Small protests also took place in the northern cities of Kirkuk and Tikrit, as well as the eastern province of Diyala.