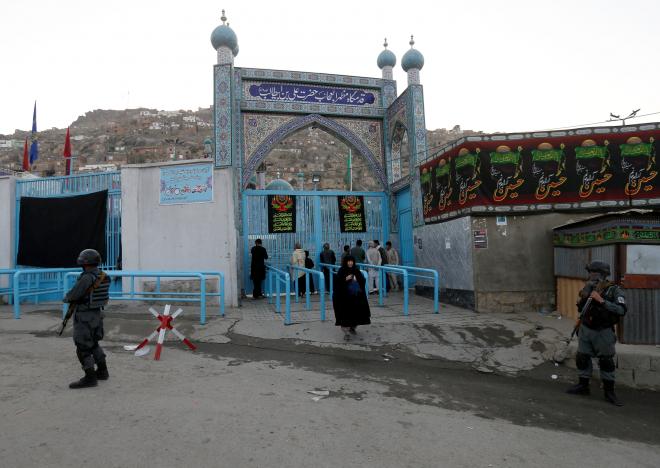 KABUL – At least 14 people were killed on Tuesday when a gunman in a police uniform opened fire on worshippers gathered at a shrine in the Afghan capital of Kabul for a Shi'ite holy day, officials said. Thirteen civilians and one police officer died and 36 people were wounded, said Ministry of Interior spokesman Sediq Sediqqi. Ministry of Public Health officials said at least 43 people had been injured in the incident and had been taken to hospitals in the city for treatment. The attack began just before 8 p.m. (3:30 p.m. GMT), police said, with witnesses reporting an explosion followed by gunfire. "People were gathered inside the shrine for worshiping when the attackers arrived, first they shot the policemen at the gate of the shrine and then they entered the compound," said Sardar Hedayat. Anguished worshippers carried the bodies of dead and wounded people from the iconic building, which is covered in brilliant blue tiles. Initial reports put the number of attackers at three, but Sediqqi said police special forces who responded to the scene found and killed only one gunman. The attacker was dressed in a police uniform, said Jamshid Jan, who witnessed the attack. An angry crowd surrounded and kicked at the suspected attacker's dead body, with some vowing to burn his remains, before police intervened. Security forces at the scene evacuated the shrine as the attack unfolded, said Kabul police chief Abdul Rahman Rahimi. The attack occurred at one of Kabul's largest shrines as Shi'ite Muslims gathered to observe the Ashura holy day, which commemorates the 7th Century death of a grandson of the prophet Mohammed. There was no immediate claim of responsibility. A Taliban spokesman denied any involvement. Afghanistan's chief executive, Abdullah Abdullah, condemned the shooting and vowed to "hold terrorists (and) their supporters accountable." Afghanistan has largely avoided widespread sectarian violence between Sunni and Shi'ite Muslims, but Afghanistan's Shi'ite minority has complained of discrimination and has faced increased threats. At least 84 people were killed and another 130 injured in a suicide attack on a Shi'ite demonstration in July. That attack, during a protest march in Kabul, was claimed by Islamic State. In 2011, Ashura gatherings were targeted by suicide bombers in Kabul and the northern city of Mazar-i-Sharif, killing about 80 people altogether. –Reuters