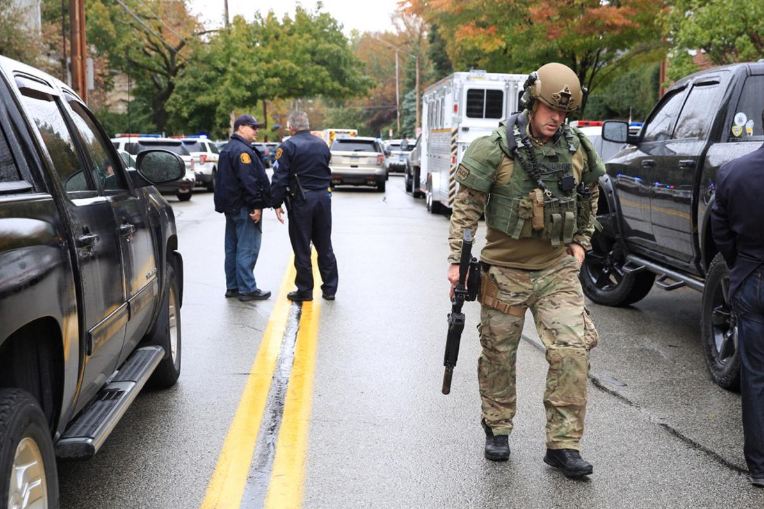 PITTSBURGH (Reuters) - A gunman killed at least eight people and injured 12 in an attack on a Pittsburgh synagogue during Sabbath religious services on Saturday, and a suspect was in custody in a possible hate crime, local authorities and media reported.
A “bearded heavy-set white male” was in custody, KDKA television said, citing police sources saying the gunman walked into the building and yelled “All Jews must die”. Responding officers “received fire” and three officers were injured, KDKA said, but it was not immediately clear if they were counted among the 12 injured.
Pennsylvania Governor Tom Wolf, who was at the scene of the shooting according to local media, said in a tweet: “We are providing local first responders with whatever help they need.”
The University of Pittsburgh Medical Center said it was treating multiple patients at UPMC Presbyterian.
Earlier, a police commander said the shooting resulted in “multiple casualties.” Police surrounded the Tree of Life synagogue after reports of an active shooter at the building in the city’s Squirrel Hill neighbourhood, local TV news images showed. “Do not come out of your home right now, it is not safe,” Pittsburgh police Commander Jason Lando warned local residents, in an impromptu news conference at the scene. The synagogue was holding a shabbat religious service that started at 9:45 a.m. (1345 GMT), according to the organization’s website. Sam Schachner, president of Tree of Life, said in a phone call he had no comment at this time. Michael Eisenberg, former president of the synagogue, told KDKA that police were normally only present at the synagogue for security on high holidays. “On a day like today, the door is open, it’s a religious service, you can walk in and out,” he said. Jonathan Greenblatt, CEO of the Anti-Defemation League, called the shooting an “anti-Semitic attack.”
Around the time of the shooting, three congregations would be using the building, Eisenberg said. The Tree of Life congregation would have about 40 people present, another group meeting for Sabbath services in the basement would have 30 to 40 people and a third Jewish congregation meeting for a study session would have about 15 people. A common atrium area would be busy with people milling around, he added. Most of the congregants were older people, according to a former rabbi interviewed by local media. Local TV news footage showed police at that location with rifles and wearing helmets and other tactical gear. Paramedics also were stationed near the synagogue and police vehicles were blocking some streets in the area. Shortly after reports of the shooting emerged, U.S. President Donald Trump said in a tweet he was watching what he described as a “devastating” situation. Trump told reporters later in the morning the killings might have been prevented if there had been an armed guard in the building. “If they had some kind of a protection inside the temple maybe it could have been a much more different situation, they didn’t,” he said when asked about a possible link to U.S. gun laws. The Tree of Life synagogue describes itself on its website as a conservative congregation that is traditional, progressive and egalitarian.