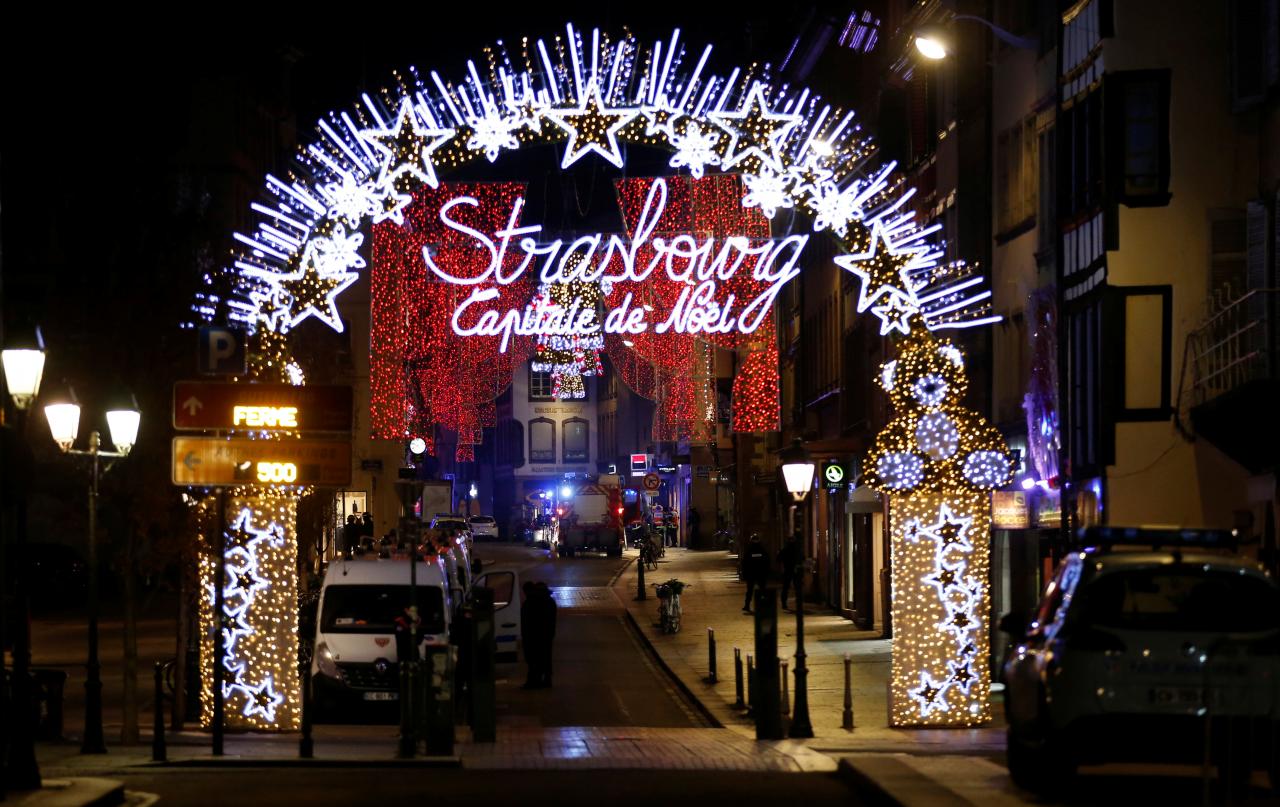 STRASBOURG, France (Reuters) - A gunman on a security watch list killed three people and wounded a dozen others near the picturesque Christmas market in the historic French city of Strasbourg on Tuesday evening before fleeing. Interior Minister Christophe Castaner said the shooter had evaded a police dragnet and was on the run, raising concerns of a follow-up attack. “The government has raised its security threat to the highest level and is bolstering border controls,” Castaner told a late-night news conference. “We will also reinforce security at all Christmas markets to prevent copycat attacks.” With France still on high alert after a wave of attacks commissioned or inspired by Islamic State militants since early 2015, the counter-terrorism prosecutor opened an investigation. Police identified the suspect as Strasbourg-born Cherif Chekatt, 29, who was known to the intelligence services as a potential security risk. Castaner said the gunman exchanged shots with security forces twice as he escaped. His whereabouts now were unknown, and elite commandos and helicopters were involved in the manhunt. The Paris prosecutor said the motive for the attack was not known. No one immediately claimed responsibility, but the U.S.-based Site intelligence group, which monitors jihadist websites, said Islamic State supporters were celebrating. The attack began at about 8 p.m. (1900 GMT) as stallholders prepared to close down and restaurants filled in the city, which sits across the Rhine River from Germany. Bystanders were swiftly ushered into nearby shops. “There was confusion initially but they locked the front doors pretty soon after the gunshots,” said U.S. citizen Elizabeth Osterwisch, who was sheltering on the top floor of the Galeries Lafayette department store. “They moved us several times, eventually settling on the place with the most protection.” European Parliament lawmaker Emmanuel Maurel said he had heard the shots. “From my hotel window I saw passersby dragging someone who was injured and onlookers panicking,” he tweeted. “Soldiers and police have cordoned off the area. We’re being told to stay in the hotel.”

The European Parliament, which is sitting in Strasbourg this week, was put into lockdown. On the opposite side of the Rhine river German police also tightened border controls, officials said. The Strasbourg prefecture said the gunman was on an intelligence services watchlist. Sources familiar with the police operation said the suspect’s home had been raided earlier in the day in connection with a robbery during the summer, but he was not found there. A Reuters reporter was among 30 to 40 people being held in the basement of a supermarket for their own safety, waiting for police to clear the area. Lights were switched off and bottles of water handed out. Security was tight this year for the Christmas market, which is popular with visitors to the city’s old quarter, with its Gothic cathedral and half-timbered houses. Unauthorised vehicles were excluded from surrounding streets during opening hours and checkpoints were set up on bridges and access points to search pedestrians’ bags. President Emmanuel Macron was being updated on events, an Elysee Palace official said. Castaner was on his way to Strasbourg.

Jean-Claude Juncker, head of the European Commission, the EU executive body, tweeted: “My thoughts are with the victims of the Strasbourg shooting, which I condemn with the utmost firmness. Strasbourg is an excellent symbol of peace and European Democracy. Values that we will always defend.” British Prime Minister Theresa May said she was “shocked and saddened.” Some 26,000 individuals suspected of posing a security risk to France are on the “S File” watchlist, of whom about 10,000 are believed to have been radicalised, sometimes in fundamentalist Salafist Muslim mosques, online or abroad. European security agencies have feared for some time that Islamist militants who left Europe to fight for Islamic State in Syria and Iraq would return after the jihadist group’s defeat, with the skills and motivation to carry out attacks at home. Secular France has been grappling with how to respond to both homegrown jihadists and foreign militants following attacks in Paris, Nice, Marseille and beyond since 2015. In 2016, a truck ploughed into a Bastille Day crowd in Nice, killing more than 80 people. In November 2015, coordinated Islamist militant attacks on the Bataclan concert hall and other sites in Paris claimed about 130 lives. There have also been attacks in Paris on a policeman on the Champs-Elysees avenue, the offices of satirical weekly publication Charlie Hebdo and a kosher store. Almost exactly two years ago, a Tunisian Islamist rammed a hijacked truck into a Christmas market in central Berlin, killing 11 people as well as the driver.