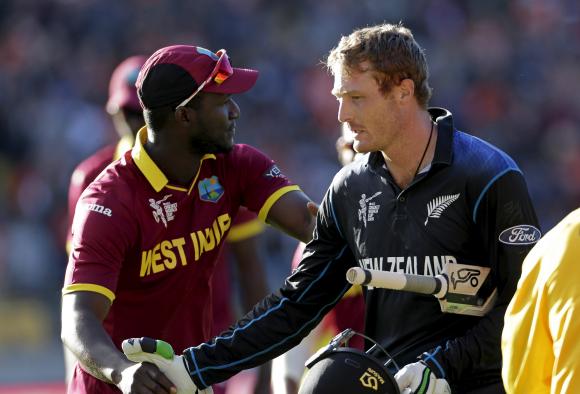 WELLINGTON – New Zealand opener Martin Guptill sent the ball soaring and the records tumbling by striking a cricket World Cup record of 237 not out on Saturday to set up his team's crushing 143-run victory over West Indies in the final quarter-final. New Zealand scored 206 off the closing 15 overs to reach 393 for six then dismissed West Indies for 250 from 30.3 overs. Their reward was a seventh World Cup semi-final appearance, this time against South Africa in Auckland on Tuesday, and another opportunity to reach a final for the first time. Australia play India in the second semi-final in Sydney two days later. After captain Brendon McCullum had won a rare toss and opted to bat on a sunny afternoon at the Wellington Regional Stadium Guptill struck the ball cleanly from the outset. He became the first New Zealander to score consecutive World Cup centuries, bettered his own national record of 189 not out then overtook Chris Gayle's World Cup record of 215 set against Zimbabwe at the current tournament. His innings took 163 balls and included 24 boundaries and 11 sixes. West Indies were left ruing a dropped chance in the opening over from Jerome Taylor when Guptill, on four, hit the ball straight to Marlon Samuels who was slow to react and dropped the ball at square-leg. Gayle, who had been in doubt for the match because of a painful back complaint, set off as if he were determined to reclaim his record after Trent Boult had bowled Jonathan Charles for three with his second ball. He swung Southee for a six and four to leg before turning his attention to the customarily frugal Daniel Vettori whose economy rate took a battering when Gayle heaved three consecutive sixes over mid-wicket. Boult continued to take wickets at the other end and Vettori took a stunning catch on the third-man boundary, leaping high to haul down the ball with his left hand to dismiss Marlon Samuels(27). Gayle, now in obvious pain, was on borrowed time and the fun ended when fast bowler Adam Milne, returning to the side after missing the final group match against Bangladesh through a shoulder injury, dismissed the left-hander for 61 with eight sixes. The remaining West Indies' batsmen peppered the boundary but capitulating swiftly. Boult finished with four for 44, overtaking Australia's Mitchell Starc as the tournament's leading wicket taker with 19 victims. McCullum started the day-night match by whipping a four through square-leg followed by a six, the 400th of the tournament, which was caught in the crowd. He departed soon afterwards skying an ambitious lofted drive which was well held by West Indies's captain Jason Holder running away from the pitch at deep cover. Ross Taylor, who had been short of runs and uncertain of technique during the group stage, played with increasing assurance after a slow start. He ran a series of quick singles and the score mounted steadily against steady but unthreatening bowling. Guptill brought up his half-century with seven fours and his century from 111 balls. He took 16 from a Taylor over and a huge six off Benn before Taylor ran himself out for 42. The West Indies' bowling and fielding disintegrated and Guptill took full advantage, hitting the first ball by Andre Russell in the final over 110 metres into the stands. Another six went over long-off, a four followed and the 30,000-strong crowd rose to Guptill as the teams left the field. –Reuters