BEIJING (92 News) – Prime Minister Imran Khan has said that Gwadar, once a small fishing village, is transforming rapidly into the biggest commercial hub of world on Friday. In his keynote speech at the opening ceremony of the second Belt and Road Forum (BRI) in Beijing on Friday, the prime minster said, “Pakistan is providing better opportunities for the foreign investors. Our efforts are being continued for a peaceful and developed world.”

PM Khan has called for joint efforts towards addressing impediments on the way to sustainable growth. He put forward five points to further expand the Belt and Road Initiative of Chinese President Xi Jinping.

“We must undertake joint efforts to mitigate the adverse impact of climate change, establish BRI tourism corridors to promote people to people and inter cultural understanding, anti-corruption office, poverty alleviation fund and concerted efforts to further liberalize trade and investment flows encouraging the private sector and businesses to collaborate in projects,” he mentioned.

Imran Khan said BRI offers a model of b, partnership, connectivity and shared prosperity. The presence of so many leaders today is the proof that we choose hope over despair and cooperation over confrontation.

The prime minister said Pakistan is amongst BRI’s earliest and most enthusiastic proponents. He said that CPEC-one of BRI’s major components - has made substantial progress. He said it has addressed our energy and infrastructure gaps. He said Gwadar once a small fishing village is transforming rapidly into a commercial hub. The Prime Minister said that Pakistan and China are entering the next phase of CPEC with focus on socio economic uplift, poverty alleviation, agricultural cooperation and industrial development. “We are expanding the frontiers of knowledge through deeper cooperation in the fields of education, innovation and technology. Along the length of CPEC, special economic zones will be set up,” he mentioned.

Imran Khan said both the countries are signing the second phase of Free Trade Agreement to further bolster our trade and economic relations. “CPEC-one of BRI's major components-has made substantial progress.”

“We are changing economic landscape of Pakistan and the destiny of its people,” the premier said. He thanked China and its leadership for extending unwavering support to Pakistan. He said our relations remain strong and unbreakable standing tall in the face of any challenge. Imran Khan said Pakistan will continue to work on the basis of mutual respect and equal opportunity with china and other BRI partners for better future of our peoples.

PM Khan also invited the international investors to make use of Pakistan's liberal investment regime and participate in the country's economy especially in the sectors of infrastructure, railways, dams, Information Technology and Manufacturing. 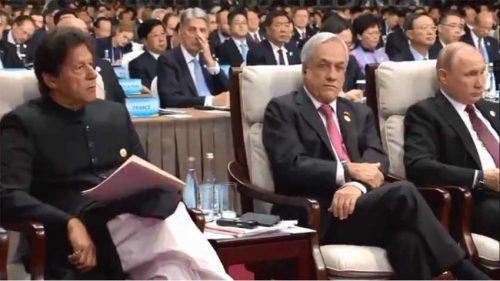 Imran Khan, who is in Beijing on a four-day official visit to China at the invitation of President Xi Jinping, is also attending the Second Belt and Road Forum. The prime minister will participate in the Leaders’ Roundtable on the second day of the forum. He will also hold bilateral meetings with Chinese President Xi Jinping, Premier Li Keqiang and other several heads of state and government and corporate and business leaders. During the visit, several Memorandums of Understanding (MoUs) and agreements will be signed between Pakistan and China for cooperation in diverse sectors.