Hafeez ruled out of PSL 4 season with fractured thumb

Hafeez ruled out of PSL 4 season with fractured thumb

LAHORE (92 News) – The management of the Lahore Qalandars announced that Lahore Qalandar’s skipper and all rounder Mohammad Hafeez ruled out from the Pakistan Super League (PSL) season four 2019 due to the fracture of thumb. The all-rounder had taken injuries during Saturday’s match against Karachi Kings. He had been taken to the hospital following the match for scans and X-rays. However, Mohammad Hafeez will not be participating in the rest of the remainder of PSL. Initially, he had been advised to rest for a few days and press release issued by the team had mentioned that a timeline for his recovery would be announced after further discussions with experts. The Qalandars today, while citing his medical tests, revealed that Hafeez's thumb was fractured and he needs a surgery. “Subsequently, he will be out of action for four to six weeks,” the press release stated. “Hafeez is being released from the Qalandars squad and a replacement will be sought to cover his place.” Team manager and franchise COO Sameen Rana expressed disappointment at the development. “This is extremely disappointing for us that Hafeez has been injured and won’t be available to Qalandars for the tournament. We wish him a quick recovery and back in action soon,” Rana said. The first phase of Pakistan Super League (PSL) edition four 2019 has been completed after four action-packed days of cricket and nothing but cricket. Meanwhile, the PSL is on a two-day break and has already given us some unforgettable performances and hilarious moments to cherish. 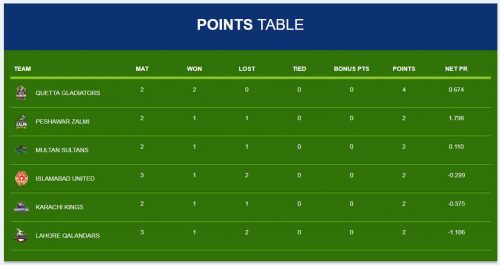