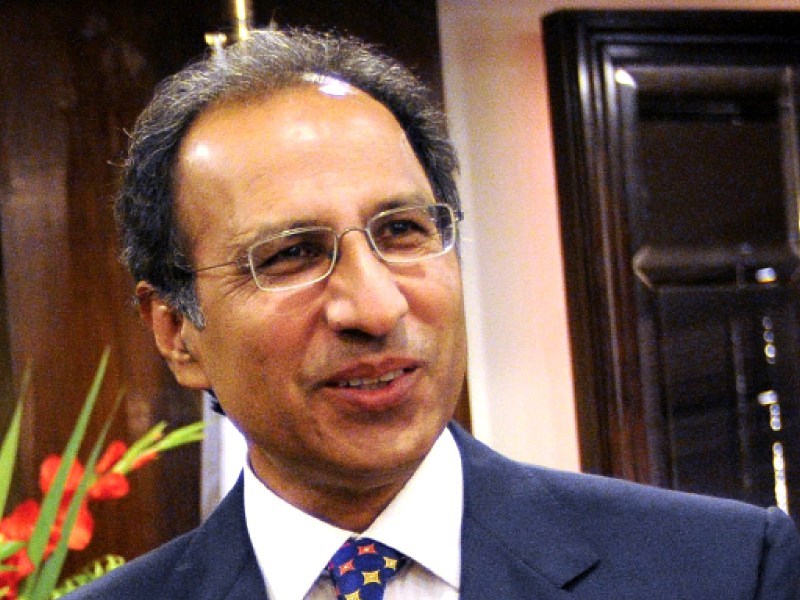 LAHORE (92 News) – Internationally renowned economist Dr Abdul Hafeez Shaikh was appointed finance adviser on the demand of International Monetary Fund (IMF) demand. This was revealed by Senior Anchorperson Rauf Klasra at “Muqabil with Rauf Klasra” program on 92 News channel. He said that Hafeez Shaikh was named for the finance adviser on the demand of IMF.

Dr Abdul Hafeez Shaikh is an internationally renowned economist with more than 30 years of experience in economic policymaking, management and implementation. Dr Shaikh has undergraduate and postgraduate degrees in economics from Boston University. He had worked at Harvard University and World Bank, where he was country head for Saudi Arabia and as a Senior Official advised 21 countries in Asia, Africa, Europe and Latin America. He served as the finance minister from 2010 to 2013 during the PPP government's rule. During his tenure as federal minister, Dr Shaikh completed 34 sale transactions worth Rs300 billion in banking, telecom, electricity and manufacturing. In 2000-2002, he was minister of finance, planning and development of Sindh. He was then appointed as the minister for privatisation and investment in the Pervez Musharraf administration. Firdous Ashiq Awan was a PPP stalwart before she joined the Pakistan Tehreek-e-Insaf (PTI) in May 2017. Awan, along with her husband, was a staunch supporter of the PPP until party co-chairman Asif Ali Zardari consolidated his control over the party. She began her political career in 1990 with a focus on improving the healthcare system, and founded the Society for Health and Development and Exchange. In 2002, she was elected to NA-286 on a reserved seat for women. In 2008, she successfully contested the NA-111 poll and was appointed the federal minister for population welfare. She later served as the information minister in the PPP government. In 2013, she again contested the NA-111 poll but this time was unsuccessful. In 2015, she resigned as the PPP Punjab vice president before joining the PTI two years later. Nadeem Babar, a former chief executive of Orient Power and Saba Power Company, had been operating in the power sector since the induction of private power producers under the 1994 power policy. In September 2018, upon the prime minister's desire, he was appointed the head of an eight-member task force on energy sector reforms. Dr Zafarullah Mirza is a former director of the World Health Organisation's (WHO) Division of Health System Development. He joined the WHO in 2004 and served in different capacities during his more than a decade-long association with the UN special agency. Dr Mirza holds a Bachelor of Medicine and Surgery from Rawalpindi Medical College, as well as a Master’s of Science degree in Public Health in Developing Countries from London School of Hygiene and Tropical Medicine.

Earlier, a major reshuffle has taken place in the federal cabinet as the portfolios of several ministers have been changed. According to the Prime Minister’s Office, the portfolio of information minister has been taken away from Fawad Chaudhry and he has been named as the federal minister for science and technology. Minister of state for interior Shehryar Afridi has now been named the Minister for States and Frontier Regions (Safron). The PTI government has also announced a federal interior minister for the first time, with the portfolio going to Ijaz Ahmed Shah. They further said that Muhammad Mian Soomro named for the minister for privatization. Ghulam Sarwar Khan, who previously was the petroleum minister, has now been named the federal minister for aviation. It was reported that Prime Minister Imran Khan was not satisfied by the performance of the petroleum minister. The government has not yet announced his replacement. On the other hand, Azam Swati nominated for the minister for parliamentary affairs and Dr Abdul Hafeez Shaikh finalized for the finance adviser. Dr Zafarullah Mirza has been appointed as Special Assistant to Prime Minister (SAPM) on National Health Services, Dr Firdous Ashiq Awan as Special Assistant to Prime Minister on Information and Nadeem Babar as SAPM on Petroleum Division. https://www.youtube.com/watch?v=L29WqILNDu8