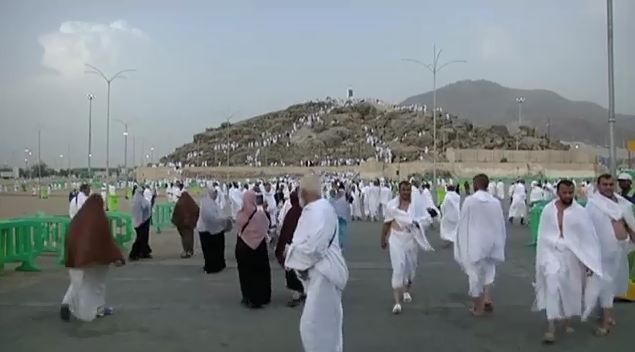 MAKKAH (92 News) – Hajj pilgrims are converging at Maidan-e-Arafat to perform the main ritual of Waqoof-e-Arafat. The pilgrims will stay at Arafat for whole day and listen to the Hajj sermon to be delivered by the grand Mufti of Saudi Arabia at Masjid-e-Nimra. They will offer Zohr and Asr prayers at Maidan-e-Arafat and will leave for Muzdalfa after sunset. During their stay in Maidan-e-Arafat, the pilgrims will offer Nawafil and special prayers. The pilgrims after the Waqoof-e-Arafat will spend whole night in open sky at Muzdalfa where they will offer their Maghrib and Isha prayers and spend the whole night in prayers. On Thursday, the pilgrims will return to Mina and perform Rami and sacrifice animals. Over two million Muslims including 143, 368 from Pakistan are performing Haj this year. The Saudi government has made foolproof security measures for the pilgrims.