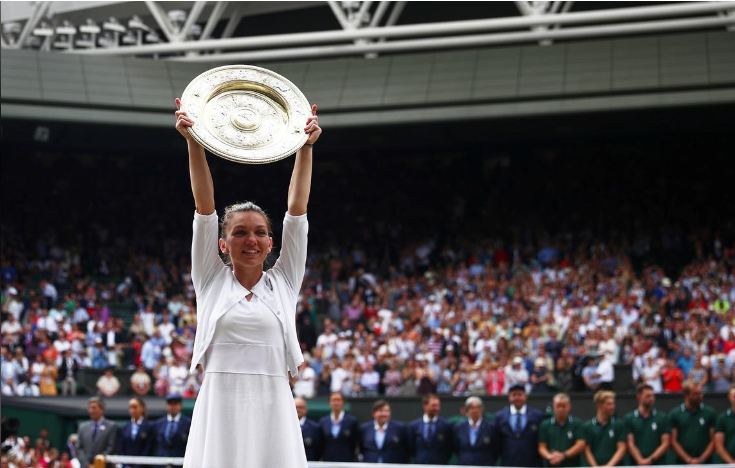 LONDON (Reuters) - Serena Williams’ wait for a record-equalling 24th Grand Slam singles title goes on after Simona Halep stunned the off-key American 6-2 6-2 in a one-sided Wimbledon final on Saturday. An inspired Halep took full advantage of an error-strewn display by seven-times champion Williams to become the first Romanian to win a Wimbledon singles title. The 27-year-old Halep, broke the Williams serve in the opening game and raced into a 4-0 lead in front of 15,000 disbelieving fans on Centre Court. She remained rock solid throughout, making only three unforced errors, and Williams simply could not respond. Even when Williams fired herself up at the start of the second set and began to strike the ball with her customary power, seventh seed Halep refused to take a backward step. Halep weathered the storm and reeled off the last five games of what she described as the best match of her life. Williams, who is still to add to her Grand Slam collection since giving birth to daughter Olympia in September 2017, looked out of ideas and the match ended after 56 minutes when she buried a forehand into the net — her 26th unforced error. “She played out of her mind,” Williams, who had won nine of her previous 10 matches against Halep, said on court after picking up the runners-up salver for the second year running, having lost to a similarly inspired Angelique Kerber last year. “It was a little bit a deer in headlights for me. Whenever a player plays like that you just have to take your hat off.” Until Saturday the only other Romanian to reach the Wimbledon final was Ilie Nastase who twice finished runner-up, in 1972 and 1976. But Halep went one better as she added the Wimbledon crown to the French Open she won in 2018. “It’s something very special and I’ll never forget this day. It was my mum’s dream when I was about 10. The day came,” former world number one Halep said. “Well I had nerves, my stomach wasn’t well before. But I knew there was no time for emotions so I just came out on court to do my best.”