Hamilton back in the hunt as F1 heads to Baku 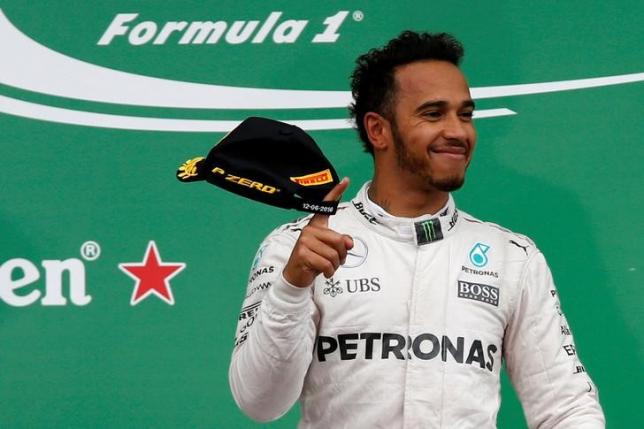 Hamilton back in the hunt as F1 heads to Baku

MONTREAL - Lewis Hamilton would not have put money on his title fortunes turning around so quickly but the Mercedes driver could be back on top of the Formula One world championship as early as next weekend. Victory in Sunday's Canadian Grand Prix, following the Briton's fortunate win in Monaco two weeks earlier, transformed his chances of ending the season with a fourth drivers' crown. From being 43 points behind German team mate Nico Rosberg two races ago, Hamilton heads for Azerbaijan and Sunday's inaugural grand prix in Baku trailing by nine. Rosberg won the opening four rounds of the season but his form has taken a dive since he and Hamilton collided in Barcelona last month. Both Mercedes drivers retired from that race, while Rosberg was seventh in Monaco and fifth in Canada. "If I'd wanted to have put money down, I would never have tried to predict that," Hamilton told reporters when asked about the turnaround. "I thought Monaco in terms of the difference in position might have been a one-off. "It doesn't feel great when we don't finish one-two. On the flip side, it is a positive in terms of the points but Nico is going to continue to push and I will continue to push." Hamilton made another poor start in Montreal, after an issue with the clutch, which allowed Ferrari's Sebastian Vettel to grab the lead at the Circuit Gilles Villeneuve while the Mercedes drivers again banged wheels. While Rosberg went off, Hamilton was able to recover and his one-stop strategy proved decisive. "There are still things to pick up on such as the starts," he said. "Hopefully if we get those then we will be back to where we always want to be." "There has never been a doubt this year of my speed, what I can do in the car." Hamilton dismissed suggestions that Rosberg was feeling the pressure, responding: "What would lead you to think he has been rattled? I don't get that sense. I think he is still pushing but we are starting to have cleaner weekends." Hamilton also sensed a growing belief among his mechanics, many of whom worked with Rosberg last year. "The first five races you could tell they felt down and seeing them now they feel great," he said. "This is what they work for. To have these wins is their life, it's our life." -Reuters