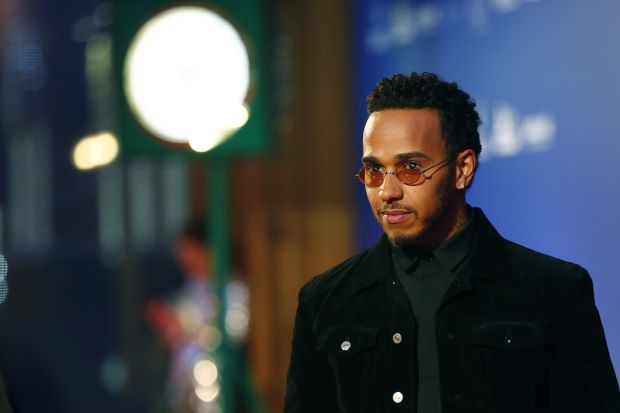 ST PETERSBURG (Reuters) - Lewis Hamilton looked forward to more success with Mercedes after collecting his fifth Formula One world champion’s trophy at the governing FIA’s gala awards. Britain’s most successful racing driver, and only the third man to win at least five titles, also won a media vote for personality of the year — denying Red Bull rival Max Verstappen a fourth in a row. “It does feel incredible,” the 33-year-old told the audience gathered in the Grand Hall of the St Petersburg Philarmonia, after FIA president Jean Todt had handed him his trophy. Asked whether matching Michael Schumacher’s record seven championships was his ultimate goal, Hamilton said he had never set that as a target. He made clear, however, that he would be around long enough to give it a try. “I’ve just signed for another two years...so I’m excited about the next couple of years,” said the champion, who won 11 races out of 21 this year. “But right now I’m happy that the racing’s over. “Next year’s going to be so tough, the seasons are getting longer and longer. I don’t know how long I’m going to go, currently two years sounds good for me. “But I still love racing so maybe I’ll be going a lot longer. Who knows?” Hamilton, who said also that his parents had wanted to be present but had a problem with the Russian visa process, had earlier been a no-show at an official news conference. Mercedes said he had not felt “100 percent”. Ferrari’s runner-up Sebastian Vettel and third-placed Finnish team mate Kimi Raikkonen were also on stage, the latter earlier seen brandishing a cigar and looking like he was enjoying the party. “Kimi has enjoyed tonight a lot,” observed the show presenter. Mercedes team boss Toto Wolff was presented with the constructors’ trophy by moustachioed Formula One chief executive Chase Carey — the team’s fifth in a row. Wolff and his team’s non-executive chairman Niki Lauda were also recipients of the FIA president’s special award, with the triple world champion absent as he recovers from a lung transplant. “He sends his regards, he is recovering very well,” said Wolff. “Next time he’s going to be here.” Charles Leclerc, Vettel’s team mate at Ferrari next year, was the rookie of the year for the second successive season after winning the Formula Two title in 2017. The Action of the Year, voted by fans worldwide, went to Finnish rally driver Teemu Suninen for a massive slide on his home event.