Hamilton fastest as Mercedes step up the pace 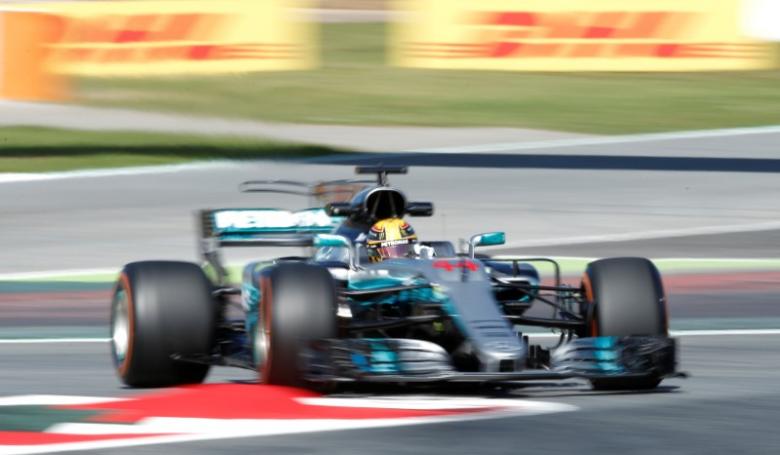 Hamilton fastest as Mercedes step up the pace

BARCELONA – Lewis Hamilton set the pace in practise for the Spanish Grand Prix on Friday as Formula One world champions Mercedes responded to the challenge of Ferrari with aerodynamic upgrades.

With the championship finely balanced after four long-haul races, Mercedes turned up at the Circuit de Catalunya with a car whose revised features drew appreciative and apprehensive murmurs around the paddock.

It appeared to be to triple champion Hamilton's liking, with the Briton producing a best lap of one minute 21.521 seconds on the medium tyres.

That was a mere 0.029 seconds quicker than Finnish team mate Valtteri Bottas, but nearly a second ahead of Ferrari's Kimi Raikkonen in third place on a sunny morning.

Championship leader Sebastian Vettel was fourth on the timesheets but 1.079 off the pace, with the German also suffering an early problem that halted his Ferrari at the pitlane exit.

"There's something broken," the German, who leads Hamilton by 13 points, said over team radio. "There's an issue with the gearbox".

The car was pushed back to the garage and Vettel reappeared on track just over half an hour later.

Spain's double world champion Fernando Alonso endured far more frustration, with his McLaren again breaking down before he had set a time.

McLaren blamed an oil leak from the Honda engine, evident to all with liquid spilling out of the tipping car as it was winched away by a crane.

"The engine blew up after one corner. It's the way it is, we miss the first session. I'm sorry for the fans," said the Spaniard, who failed to start the previous race in Russia due to a breakdown on the formation lap.

"Hopefully the second session can be better and we recover this time. It's tough but it's more tough for McLaren, who brings updates trying to find a millisecond here and there and we cannot even run."

Alonso is due to head straight to Indianapolis after Sunday's race, missing the Monaco Grand Prix so he can compete in the Indy 500 on the same day.

On the team's current form, it will come as a relief -- with paddock jokers already wondering what other sporting events he might want to enter to delay his return. Wimbledon, perhaps?

The driver, an active user of social media, posted a photo on Instagram of himself on a tennis court.

Red Bull's Max Verstappen, last year's winner in Spain on his team debut, was fifth fastest ahead of Australian team mate Daniel Ricciardo. The team had also been hoping for a big step up with aerodynamic upgrades.

Haas driver Kevin Magnussen, using an upgraded floor on his car after the toss of a coin to decide who got it, was seventh with French team mate Romain Grosjean eighth. –Reuters