Hamilton on pole for final race of F1 season 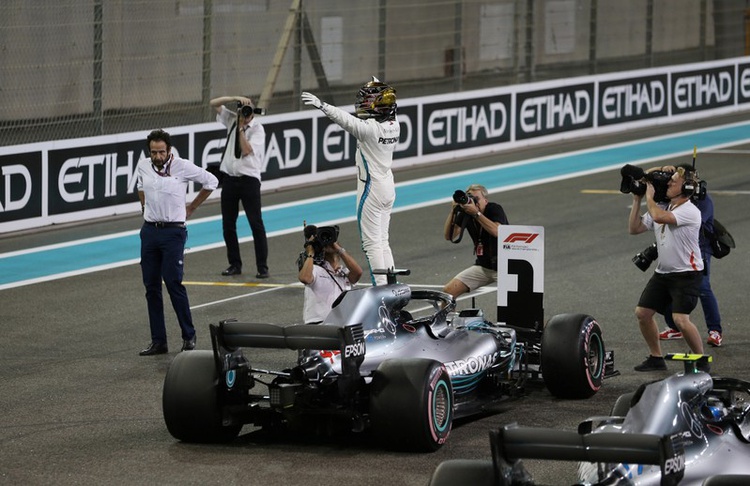 Hamilton on pole for final race of F1 season

ABU DHABI (Reuters) - Five-times Formula One world champion Lewis Hamilton led a Mercedes front-row lockout with a blistering pole position at the season-ending Abu Dhabi Grand Prix . The pole was a record-extending 83rd of the Briton’s career and 11th of the season, as well as the fifth year in succession that Mercedes have swept the front row at the floodlit Yas Marina circuit. Hamilton’s pole lap of one minute 34.794 seconds was also a track record. Finnish team mate Valtteri Bottas secured his front-row slot, last year’s race winner being 0.162 seconds off the pace, with the Ferraris of Sebastian Vettel and Kimi Raikkonen filling the second row. “It’s quite an emotional qualifying session for me because it’s the last time I’m going to be qualifying in this car,” said Hamilton after stepping out of the Mercedes to kiss it and then wave to the crowd. “The emotional roller-coaster that I’ve gone through with this car, I’m probably the closest to this car that I’ve ever been with any car. So I’m emotionally attached,” added the 33-year-old. “It’s not always been easy, it’s been a struggle with her but it’s been a real privilege to work with her this year and I’m just so grateful to the team, to everyone, for putting it together.” Saturday was a last chance for Red Bull’s Max Verstappen to become the youngest ever driver on pole but the 21-year-old ended up sixth on the grid and behind Australian team mate Daniel Ricciardo. Romain Grosjean qualified seventh for Haas with Charles Leclerc eighth in his last race for Sauber before taking Raikkonen’s place at Ferrari. French youngster Esteban Ocon, who will drop back to a reserve role at Mercedes next season, put his Force India ninth on the grid and ahead of Renault’s Nico Hulkenberg in 10th. With nothing at stake for the top teams, and no orders holding anyone back, Sunday’s race promises to be a full-on fight for victory. “Today was so much fun,” said Hamilton, who took the provisional pole with his first flying lap in the final phase of qualifying. “To go out there and be able to just express yourself and push the car the way you want, there’s no better feeling.” Bottas, without a win this season while Hamilton has taken 10 victories, had hoped to take the top slot for the second year in a row but recognised his team mate had once again pulled a stunning lap out of the bag. “P2 (second) wasn’t what I was expecting... but a one-two for the final race is good,” he said. “He was performing well, it was tough to beat his time. He did a better job in the lap,” said the Finn. Vettel, a five times winner this year, said he was confident for the race. “Looking forward to tomorrow, get in the car for the last time this year and challenge these guys, give it everything we have.” McLaren’s Fernando Alonso, the two-times world champion who is walking away from Formula One after Sunday, completed a season of out-qualifying his Formula E-bound Belgian team mate Stoffel Vandoorne in every race. The Spaniard, with a special helmet design and tribute livery on his car, will start in 15th place. “First priority is to finish the race, see the chequered flag, execute the race good enough to feel proud on the last one,” said Alonso. “If we can be in the points that will be a dream.”