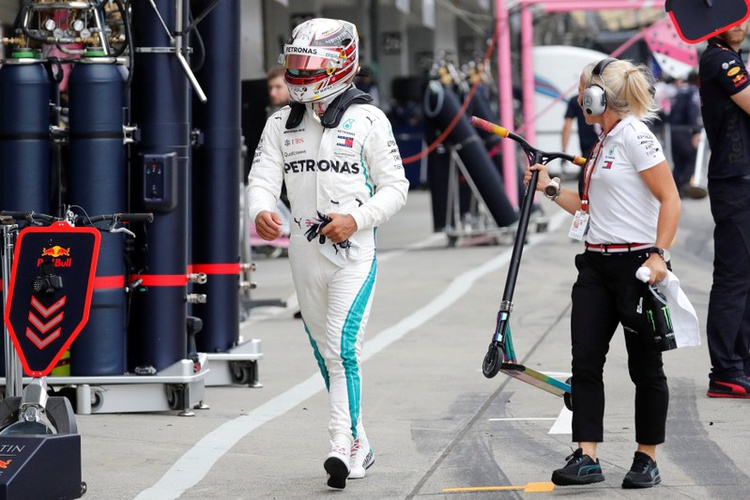 SUZUKA, Japan (Reuters) - Lewis Hamilton revelled in the speed of his Mercedes as the Formula One championship leader dominated Suzuka’s ‘rollercoaster’ circuit in Japanese Grand Prix practice. The Briton was in a league of his own, lapping nearly half a second faster than his team mate Valtteri Bottas in both sessions. Ferrari rival Sebastian Vettel, a hefty 50 points behind Hamilton with five races remaining, was nearly a second adrift of his fellow four-time champion. Hamilton did not put a foot wrong and was caught out only when Toro Rosso’s Pierre Gasly slowed in front of him into the final chicane, with the champion forced to jink right and take to the escape road. “This track is awesome, I’m having the best day,” Hamilton whooped over the team radio during the second 90 minute session. “Through that middle section, that first and second section, it’s insane,” he told reporters, still barely able to contain his excitement. “It’s the best rollercoaster ride, that first section, that I’ve particularly felt in a Formula One car.” The 5.8-km Suzuka circuit’s unique figure-of-eight layout with its fast, undulating sweeps is a firm favourite with the drivers. The opening part of the lap, with its sequence of rapid left-right corners racing up the hill, poses a particular challenge. Getting it right is extremely rewarding but small mistakes can have huge consequences. With the sport having switched to wider, faster cars with fatter, grippier tyres, it has become even more of a thrill. “The cars are getting faster and faster,” said Hamilton. “It’s incredible. The track is just...they don’t make tracks like this any more.” Hamilton is a three-time winner in Suzuka, which is hosting its 30th grand prix this weekend. His other win in Japan was at the Fuji circuit. In the form of his life and on a streak of five wins from the last six races, it will be hard to bet against the Briton winning again on Sunday. Vettel has the best record of any current driver at the Honda-owned track, with four wins, but needs a stroke of luck to spark his fading title hopes. Earlier, it was Hamilton who was on fire. “I’ve just been giving thanks all day today just because this is what I’ve always wanted to do,” he said. “I won’t be doing it forever so you just have to cherish your moments.”