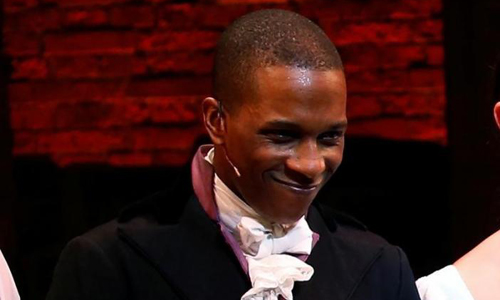 NEW YORK- "Hamilton" star Leslie Odom Jr., actress Queen Latifah and choreographer Camille Brown were honored at the annual Princess Grace awards ceremony in New York City on Monday night for their work in the arts. Odom Jr., who won a Tony Award in June for his role in the smash Broadway hit "Hamilton," and Brown, a choreographer and dance educator, received the 2016 Princess Grace Statue Award, named after the late American actress Grace Kelly. Singer and actress Queen Latifah received the Prince Rainier III Award, named after the awards founder and late husband of Princess Grace, for her contribution to the arts. The three African-American artists were honored at a gala ceremony on Broadway hosted by British supermodel Naomi Campbell and attended by Monaco's Prince Albert II and his wife Princess Charlene. Speaking to reporters, Odom Jr. recalled the significance of standing alongside three other African-American artists who also won in the musical category at the Tony Awards a few months ago. "So, if some little kid sees that image of us holding our Tony awards or holding our Princess Grace award, it gives them the willingness to dream for themselves, then that is a beautiful thing," he said. In a recent interview with People magazine, Odom Jr. said he had received a $25,000 grant from the Princess Grace Foundation in 2002 which allowed him pay his college tuition bills. The program for aiding emerging artists "was a huge help to my family and it changed my life," he said. The foundation said on its website it has awarded over $11 million to more than 800 recipients since it started in 1982, after the death of Grace Kelly. The American actress became a princess after marrying Prince Rainier III of Monaco in 1956. -Reuters